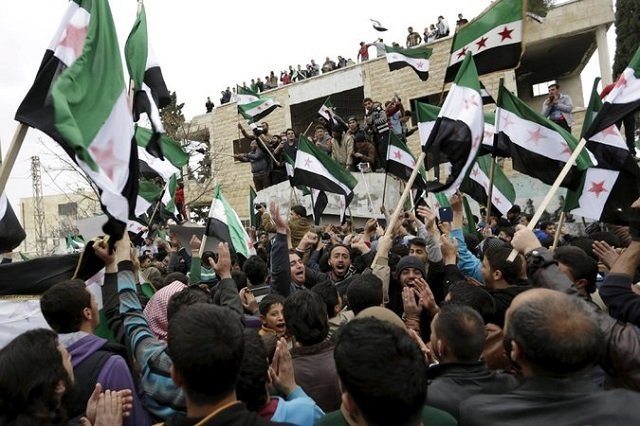 Street protests erupted across insurgent-held areas of Syria on Friday, as demonstrators took advantage of the relative lull in airstrikes during a partial truce, coming out in the largest numbers in years to declare that even after five punishing years of war they still wanted political change.

Under the slogan “The Revolution Continues,” demonstrators waved the green, white and black pre-Baathist flag adopted during the early, largely peaceful stages of the revolt, before the proliferation of armed Islamist factions with black jihadist banners.

It was impossible to gauge what percentage of Syrians the demonstrators represented, out of the millions living in insurgent-held areas or, for that matter, in government-held areas or as refugees abroad. But many protesters, reached by telephone and text message, said they aimed to show that they were determined to resume demonstrations seeking the ouster of  [psychopath] Bashar al-Assad as soon as there was even a partial respite from airstrikes by the government and its Russian allies.

The protests were all the more surprising in that the insurgency is struggling militarily, squeezed between pro-government forces and those of the Islamic State.

Ahmad al-Saud, a commander of a rebel group that has received weapons and aid from the United States and its allies, appeared in the crowd at a protest in his hometown, Maarat al-Noaman, in the northern province of Idlib, according to photographs widely shared online.

“We are not fans of killing, but the regime forced us to fight,” was the protesters’ message, said a local activist who goes by the pseudonym Ibrahim al-Idlibi for his safety.

The demonstrations came as electricity gradually returned to areas across Syria after a mysterious power failure on Thursday took down what is left of the national grid and disrupted Internet service.

Supporters and opponents of the government alike fiercely speculated on social media over the cause of the problem. The state news agency, SANA, said the Internet disruption was caused by “sudden damage” to one of the hubs of the national telecommunications system. Pro-government news portals quoted the minister of electricity as saying that the cutoff had to do with a technical fault in the valves supplying fuel to the power grid.

A government police officer stationed in Homs vented his frustration in a text message. “We’ve been hours with no electricity,” he wrote. “I swear to God I’m suffocating.”

He complained that some parts of Syria had electricity nearly round the clock, while others had just an hour or two a day.

Perhaps the greater mystery was how, after five years of war, much of government-held Syria and some insurgent-held areas remain on a national grid.