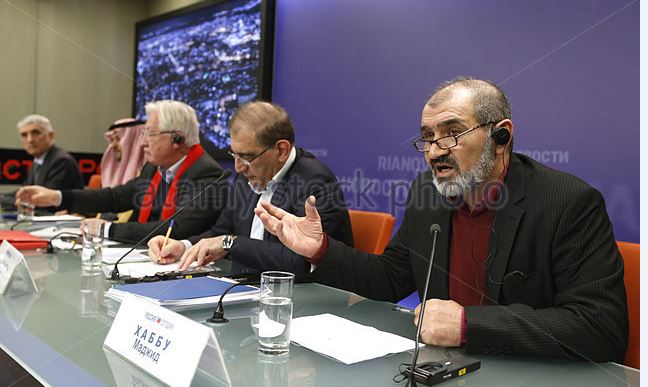 Talks to end Syria’s brutal five-year conflict were rattled Thursday by uncertainty surrounding the arrival of a second opposition group and the declaration by Syria’s Kurds of an autonomous region. Assad is injecting fake Syrian opposition in Geneva talks who are his agents and spies aiming at disrupting and sowing discord from within. Peace talks would fail if they are permitted entry.

U.N. mediator Staffan de Mistura met for the first time late Wednesday with an umbrella delegation including the so-called Moscow Group or fake Syrian opposition, which is demanding an equal seat at the negotiating table in Geneva.

But such a move would be hotly contested by the “official” opposition High Negotiations Committee (HNC) — a broad collection of political and armed opposition factions which joined forces in Riyadh last December.

The HNC is due to have a second official meeting with de Mistura on Thursday, where it is expected to insist on its demand to remain the sole opposition representative in the talks.

“That is one of the most important points,” a Western diplomat told AFP, requesting anonymity.

The entry into the talks of the Moscow Group or fake Syrian opposition, along with the so-called Cairo and Istana groups, followed Russia’s surprise decision this week to withdraw most of its forces from Syria, where they had been fighting in support of the psychopath Baschar al-Assad.

Western governments had voiced hopes the pullout, expected to be completed by the end of the week, could boost the talks by pressuring Assad.

But Russian President Vladimir Putin said Thursday his country could ramp up its presence again if needed “literally within several hours”.

In Geneva, it was not immediately clear what impact the inclusion of the pro-Moscow group would have on the talks, or whether it was a gesture from de Mistura to Russia following the pullout.

The U.N. has not yet clarified what role the Moscow Group would play but its co-president Randa Kassis told reporters Wednesday her camp was in Geneva “as a negotiating delegation”. Meaning it would negotiate for Assad to remain in power.

Jihad Makdissi, a member of the Cairo group, told AFP Thursday: “We will sit at the table as two (opposition) delegations,” adding that de Mistura had agreed to meet again with the new delegation in the coming days.

The Moscow Group is tolerated by Damascus and has not insisted on Assad’s departure as a condition for creating a transitional government, which is an unequivocal HNC demand.

The HNC and the Western powers that support it meanwhile insist only one opposition delegation and one government delegation can actually negotiate.

The Moscow Group has no troops on the ground in Syria, and is being put forward to “support the idea that there is no united opposition and to cast doubt on HNC’s legitimacy,” the Western diplomat said, adding that adding a second opposition delegation was “a highly contentious issue.”