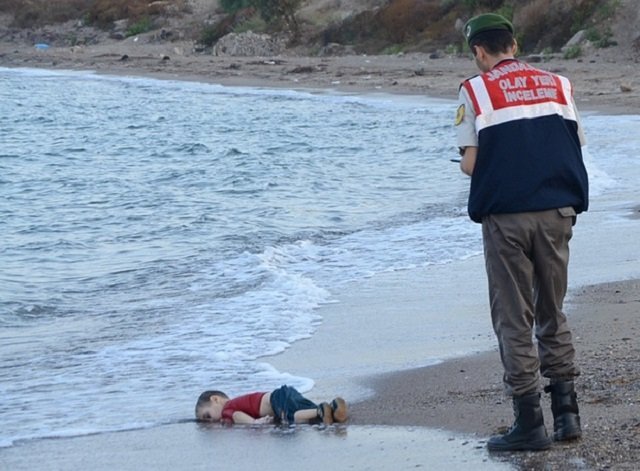 The full horror of the human tragedy unfolding on the shores of Europe was brought home on Wednesday as images of the lifeless body of a young boy – one of at least 12 Syrians who drowned attempting to reach the Greek island of Kos – encapsulated the extraordinary risks refugees are taking to reach the west.

The picture, taken on Wednesday morning, depicted the dark-haired toddler, wearing a bright-red T-shirt and shorts, washed up on a beach, lying face down in the surf not far from Turkey’s fashionable resort town of Bodrum.

A second image portrays a grim-faced policeman carrying the tiny body away. Within hours it had gone viral becoming the top trending picture on Twitter under the hashtag #KiyiyaVuranInsanlik (humanity washed ashore).

Turkish media identified the boy as three-year-old Aylan Kurdi and reported that his five-year-old brother had also met a similar death. Both had reportedly hailed from the northern Syrian town of Kobani, the site of fierce fighting between Islamic state insurgents and Kurdish forces earlier this year.

Justin Forsyth, CEO of Save the Children, said: “This tragic image of a little boy who’s lost his life fleeing Syria is shocking and is a reminder of the dangers children and families are taking in search of a better life. This child’s plight should concentrate minds and force the EU to come together and agree to a plan to tackle the refugee crisis.”

Greek authorities, coping with what has become the biggest migration crisis in living memory, said the boy was among a group of refugees escaping Islamic State in Syria.

Turkish officials, corroborating the reports, said 12 people died after two boats carrying a total of 23 people, capsized after setting off separately from the Akyarlar area of the Bodrum peninsula. Among the dead were five children and a woman. Seven others were rescued and two reached the shore in lifejackets but hopes were fading of saving the two people still missing.

The casualties were among thousands of people, mostly Syrians, fleeing war and the brutal occupation by Islamic fundamentalists in their homeland.

Kos, facing Turkey’s Aegean coast, has become a magnet for people determined to reach Europe. An estimated 2,500 refugees, also believed to be from Syria, landed on Lesbos on Wednesday in what local officials described as more than 60 dinghies and other “unseaworthy” vessels.

Some 15,000 refugees are in Lesbos awaiting passage by cruise ship to Athens’ port of Piraeus before continuing their journey northwards to Macedonia and up through Serbia to Hungary and Germany.

“The situation on the islands is dramatic in terms of the sheer numbers flowing in, lack of shelter and ever worsening hygiene conditions,” Ketty Kehayioy, the UNHCR’s spokeswoman in Athens told the Guardian. “The absence of staff to conduct registrations is creating enormous bottlenecks on Lesvos and Kos which is further exacerbating substandard conditions, conditions themselves worsened by very limited facilities.”

Wednesday’s dead were part of a grim toll of some 2,500 people who have died this summer attempting to cross the Mediterranean to Europe, according to the UN refugee agency, UNHCR.

Athens’ caretaker government, in power until elections are held on 20 September, announced emergency measures to facilitate the flow after meeting in urgent session under the prime minister, Vassiliki Thanou.

The migration minister, Yiannis Mouzalas, said the measures would aim to improve conditions both for refugees and residents on islands such as Kos and Lesbos.

Conditions on islands have become increasingly chaotic with local officials voicing fears over the outbreak of disease amid rising levels of squalor.

“The problem is very big,” said Mouzalas, a doctor who is also a member of the Doctors of the World aid organisation. “If the European Union doesn’t intervene quickly to absorb the populations … if the issue isn’t internationalised on a UN level, every so often we will be discussing how to avoid the crisis,” he told reporters, insisting that the thousands risking their lives to flee conflict were refugees. “There is no migration issue, remove that – it is a refugee issue,” he said.

The UNHCR calculates that some 205,000 Europe-bound refugees have enteredGreece, mostly via its outlying Aegean isles, this year alone. The vast majority (69%) are Syrians, Afghans (18 %), Iraqis and Somalis fleeing conflict in their countries.

In Hungary’s capital, meanwhile, where the authorities reversed their position and moved to stop migrants travelling to Germany and other western EU ­countries, hundreds continued to protest at Keleti ­station. Tensions rose throughout the day as the number of mainly young men swelled to over 2,000.

With police blocking their path into Budapest’s main international train station, the crowds chanted, “No police! No police!” and “Germany! Germany!”

Passions also flared on Hungary’s border with Serbia as rightwing nationalist protesters marched to the location where migrants use a train track to walk into the country. Police formed protective circles around frightened migrants as the demonstrators screamed abuse at them.

“We have to reinstate law and order at the borders of the European Union, including the border with Serbia,” Hungarian government spokesman Zoltan Kovacs said. “Without re-establishing law and order, it will be impossible to handle the influx of migrants.”

He said Hungary’s prime minister, Viktor Orban, would take a “clear and obvious message” to a meeting in Brussels on Thursday with EU chiefs about the migration crisis.