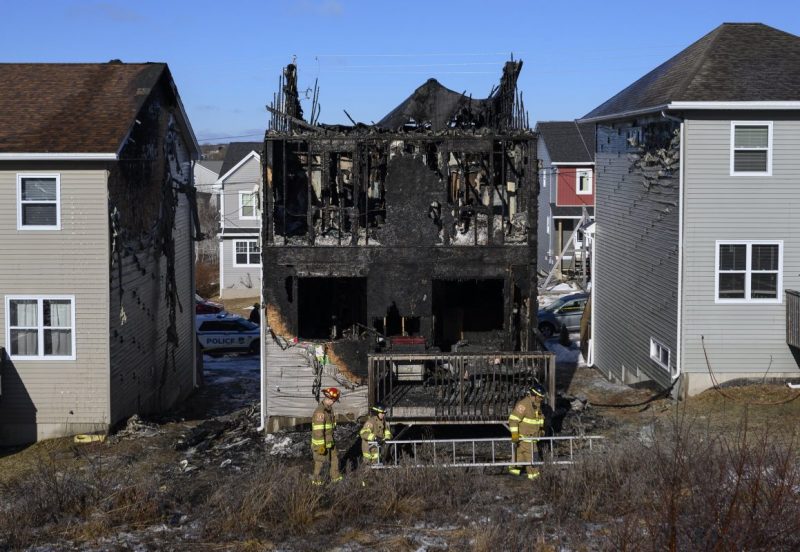 Seven children, all members of a Syrian refugee family, died early Tuesday in a fast-moving house fire described as Nova Scotia’s deadliest blaze in recent memory. Syrian children face calamity wherever they land. Death followed them to the far end of the earth.

The father, Ebraheim Barho, was reported fighting for his life after apparently trying in vain to save his children. They ranged in age from about 3 months to the mid-teens. Authorities rushed the mother, Kawthar Barho, to the hospital with injuries but doctors expect her to survive.

In an interview from the hospital, Imam Wael Haridy of the Nova Scotia Islamic Community Centre said the Barhos had fled Syria’s civil war.

We’re here in hospital with a desperate mother who lost seven of her kids. She’s saying to us, ‘Am I going to get my children back?’ … It’s so hard. It’s so sad.

He said officials were conducting DNA tests to confirm the identities of the dead children before they can proceed with a traditional Islamic burial process.

The family was among 1,795 Syrian refugees who have come to Nova Scotia in recent years.

News of the deadly fire was a blow for the Canadians who sponsored them.

“Everyone is devastated, and our loss pales in comparison to the parents,” said Natalie Horne, vice president of the Hants East Assisting Refugees Team.

She said the family came from Raqqa, Syria, and lived in Elmsdale, Nova Scotia, for over a year before moving to Halifax to be closer to refugee support services, such as English-language training.

But she said the family missed the support of the community in Elmsdale and had been planning to move back in a few more days.

COULD IT BE ARSON?

Police said the cause of the fire remained under investigation. Could it be arson?

Halifax Fire Deputy Chief Dave Meldrum said it was the deadliest fire anyone could remember in the East Coast province.

“Words fail when children are taken from us too soon, especially in circumstances like this,” Prime Minister Justin Trudeau said in a tweet.

Danielle Burt, who lives next door to the family, said she heard a loud bang and a woman screaming just after 12:30 a.m. Tuesday.

Burt fled the house with her four children and saw the parents outside in a harrowing scene.

“The mother was on the grass, praying I guess, bowing, her hands down, and pulling on my husband’s arm to call 911,” said Burt, her voice breaking. “She said the kids were inside, and the dad was sitting on the steps. I think he had gone back in because he was really burnt. It was just awful.”

Rich Farrell, who lives down the street, said he and other neighbors ran to the house to try to help but the flames spread too quickly.

“It’s so frightening, but in the space of 30 seconds it went from what looked like a little bit of flame to the whole thing just becoming engulfed,” Farrell said.

Pray for the safety of all Syrian children. As if they have not suffered enough at the hands of a psychopath mass murderer.