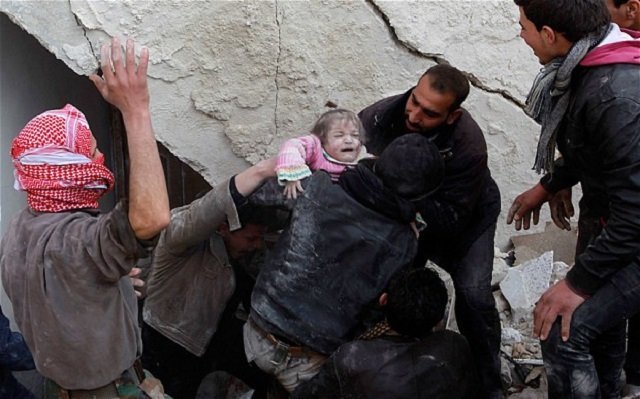 December 15, 2013 4:04 pm 0
The Next Breeding Ground for Global Jihad
Syrian jihadists wreak havoc as violence spreads into Iraq
Assad must be dreaming he can glue Syria together

The Assad barrel bombs dropped on Aleppo have killed 22 people, 14 of them children.

Aleppo, Syria’s second city, is divided between rebel and government-held districts and the air force regularly targets rebel areas with barrel bombs dropped from helicopters. Large parts of the city, a commercial hub, have been destroyed since a rebel offensive last year.

The districts of Sakhur, Ard al-Hamr and Haydariyeh were hit. The activist-run Aleppo Media Centre also reported several helicopter attacks in the city, according to the AFP news agency.

Reports of the latest violence in Aleppo came a day after French Foreign Minister Laurent Fabius said he was pessimistic about the prospects for peace talks planned for next month in Switzerland.

Mr Fabius said France was trying to make the talks a success, but that there was “a great deal of doubt”.

The moderate anti-government groups which France has been working with were “in serious difficulty”, he said.

The US, UN and Russia have been struggling for months to get the talks, known as Geneva II, off the ground.

The negotiations will aim to ensure the delivery of humanitarian aid, end the fighting and outline a political transition for Syria.

The Assad’s government has said it will attend in principle, but will accept no preconditions and refuses to negotiate with “terrorists”, its term for almost all its political and military opponents.

The opposition has said any political solution to the crisis must include the removal of Mr Assad.

It remains unclear who will take part in the conference in the Swiss town of Montreux on 22 January, with reports emerging last week that representatives of more than 30 countries wanted to attend.