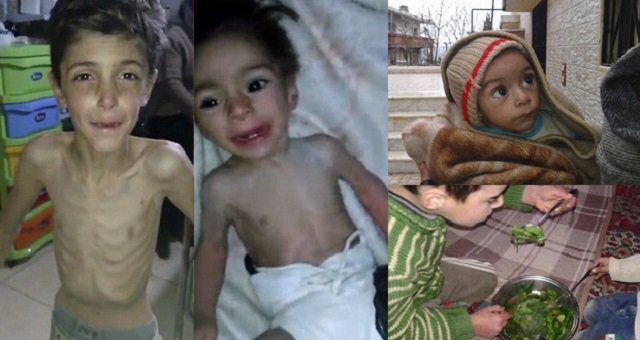 January 29, 2016 3:48 am 0
When Western Diplomats Pursue Peace to Pursue a Prize
Kerry’s Habitual Dead On Arrival Peace Efforts
Peace Nobel Laureate to Stop Wars or to Start Them?

In the rebel-held Damascus suburb of Moadhamiya, residents say a renewed Syrian government siege there and bombardment of the neighboring town of Daraya have cut off the last food-smuggling routes, forcing many to subsist on one meal a day.

Similar humanitarian crises are playing out around Syria, where residents, rebels and international aid agencies accuse the regime of President Bashar al-Assad of reinstating or tightening sieges on opposition-held areas to help subdue, reclaim or hold strategic territory.

The government’s siege tactics have become more systematic and have escalated over the past two months, part of an overall military effort to secure more territory and strengthen the government’s hand ahead of United Nations-brokered peace talks set to begin in Geneva on Friday, Western diplomats, aid officials and Syrian rebels say.

The sieges are occurring despite extreme international pressure to lift restrictions on humanitarian aid to millions of civilians ahead of the talks.

“There is a clear Syrian government policy: no siege on any civilian no matter their political affiliation,” he said in a telephone interview. He added that rebels are besieged as part of military warfare. “Our problem is there are civilians in some of these areas, and that is why we work on truces.”

“More and more people are living in areas that are under siege or are hard-to-reach than ever before,” said Mr. O’Brien, who is also the U.N.’s undersecretary general for humanitarian affairs. “We are in a race against time.”

Last year, the U.N. was able to deliver humanitarian assistance to only around 1% of people in besieged areas, he added.

The U.N. says close to 490,000 people live in besieged areas in Syria, largely blocked from receiving humanitarian aid. They are part of some 4.6 million people classified as hard to reach. Other humanitarian organizations say estimates by the U. N.—which depends on government approval for access and logistics of aid delivery inside Syria—are conservative.

Mercy Corps, an international development organization, estimates there are at least half a million people in besieged areas with no access to aid. Syrian opposition advocacy groups put the number closer to one million.

Previous diplomatic talks on Syria have also focused on besieged and starving civilians, though the deliberations are meant to focus on forging a political transition. The opposition has used the plight of civilians to underscore its demand that Mr. Assad must be removed from power to end the crisis.

The government has struck local truces before, under pressure from the U.N. and diplomatic allies on the Security Council including Russia, and lifted or eased sieges to show goodwill. Russian airstrikes in Syria since September, however, may be serving to bolster the sieges by decimating underground smuggling routes. Russia in the past has urged the regime to allow humanitarian aid.

Samantha Power, the U.S. ambassador to the U.N., on Wednesday called for countries that have influence over Syria’s regime to use it to gain access for humanitarian aid in the besieged areas. “While we welcome news that a handful of convoys carrying food and medical assistance were able to reach one of those areas—Madaya—over the past few weeks, we cannot for one minute think that the situation is improving overall.”

The sieges came under renewed scrutiny this month when the government allowed three U.N.-led aid convoys into the Damascus suburb of Madaya, where dozens have died during a seven-month siege. The provisions arrived after images of emaciated children and elderly people provoked an international outcry.

“Madaya is far from the first episode over the five years of the Syria war,” said Nancy Lindborg, president of the United States Institute of Peace, who previously led Syria aid efforts at USAID, the U.S. government’s humanitarian and development body.

“We are seeing the kind of posturing you saw over and over again in the Balkans, as we move towards really vital talks,” Ms. Lindborg said, referring to the 1990s conflict in the former Yugoslavia. “People are positioning on the ground.”

In the Damascus suburbs, away from the international gaze, a new crisis is unfolding in Moadhamiya, 3 miles from the capital.

Through local partners, the International Rescue Committee has documented 23 starvation-related deaths in Moadhamiya over the past three weeks, said Kevin Raabe, a deputy director of the aid group. Stocks of bulghur, wheat, rice and sugar are dwindling since government forces blocked the last road into town in December. Flour and infant formula have run out. Residents are using old wells to extract drinking water.

“It’s a very tiring way to live, or I guess survive,” said Ammar Ahmad, a resident who helps with local relief efforts.

The multiple parties in Syria’s war have engaged in sieges. Islamic State is besieging the largest single community in Syria, about 200,000 people in the eastern city of Deir Ezzour. Some 274,200 people are besieged by the government across at least 12 towns, according to the U.N.

Rebels and fighters from al Qaeda’s Syrian branch, Nusra Front, are besieging another 12,500 in two towns in Idlib province. Those two towns received aid in tandem with the deliveries to government-besieged Madaya this month.

U.N. officials have warned Damascus it is accountable for its citizens and that the siege and starvation tactics may amount to war crimes. The government controls the largest number of besieged communities, and has blocked the U.N. from access to rebel-held areas.

Some Western and aid officials accuse Damascus of manipulating the truces and using aid as a bargaining chip by linking access to the starving and sick with cease-fires meant to subdue or expel rebels.

That has put into focus a U.N.-led strategy of forging local truces across the country as steps toward a broader cease-fire, which is one of the goals of the Geneva meetings. Even towns in a technical state of truce suffer shortages because government forces continue to partially surround them and restrict what goes in and out, residents of four besieged Syrian towns said.

That sometimes includes food staples, including flour or canned goods, “to retain military and political pressure points,” saidMohammad Hassno of the Assistance Coordination Unit, a Western-funded opposition group that coordinates aid deliveries into Syria. “The idea seems to be not to allow for long-term sustenance of these populations.”

Moadhamiya faces new pressure even though it struck a truce with the regime in 2013 that still left the town with severe shortages.

In December, the government delivered a fresh ultimatum to rebels, who had put down their arms in late 2013, said residents involved in the negotiations: surrender, exit, and allow the army in, or risk further deprivation.

On Christmas Day, government forces closed the last open road into Moadhamiya and a new siege began. Rebels and residents said conditions have quickly deteriorated since they refused the new offer.

Mr. Haidar, the reconciliation minister, said the government is in negotiations with Moadhamiya because rebels there, though they had put down arms and weren’t violating the earlier truce, were found to be aiding rebels in neighboring Daraya, where residents also report severe food shortages and cases of starvation.

“As usual, the regime imposes the siege on the city before each conference or an important event,” said Sham, a member of a Moadhamiya town council. “The siege is back to suffocating again,” he said. “The humanitarian and living situation is terrible.”