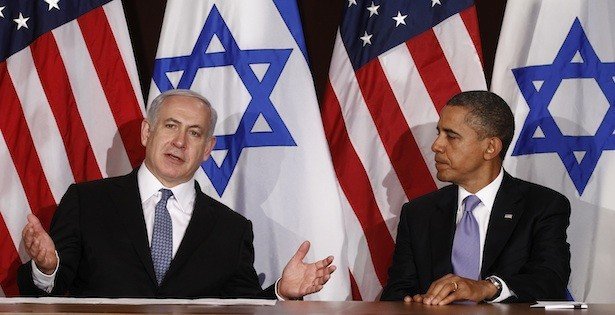 February 4, 2015 5:22 am 0
When Squeezed, Assad Yields Acid
The Dumb Obamacans
The dirty war behind the wars

Apparently, the “chickens***” insult from the White House at the hardline Netanyahu last October — tantamount to accusing Charles Lindbergh of fear of flying — wasn’t enough.

Now “a senior administration official” who “would not be named” tells the New York Times that the Israeli leader’s accepting Congress’ invitation to speak about Iran’s nuclear threat is an outrage — just one of the repeated instances of placing “Netanyahu’s political fortunes above the relationship between Israel and the United States.”

Last week, a “senior American official” used Israel’s Haaretz newspaper to deliver an anonymous threat: “Netanyahu ought to remember that President Obama has a year and a half left to his presidency and that there will be a price.”

This week, the White House’s attempt to put the spotlight on Ron Dermer, Israel’s aggressive, American-born ambassador to the U.S., cannot distract from the fact that it’s President Obama, not Bibi Netanyahu or anyone working for him, who has mutilated the Middle East’s most crucial bilateral alliance.

From delivering a speech in Cairo in 2009 that opened to door to destabilization and radicalism all over the Islamic Middle East in the misnamed “Arab Spring,” to calling for Israel’s borders to return to the indefensible 1967 lines, to being manipulated by Islamofascist Iran at the nuclear negotiation table, this president repeatedly has assisted threats to the Jewish state’s survival.

Haaretz also reports that opposition to Netanyahu within Israel in its upcoming election is being helped by Jeremy Bird, Obama’s “Organizing for America” deputy national field director for 2008 and 2012.

He and other American campaign operatives have hooked up with the State Department-funded “One Voice International,” an activist organizing group that seeks Israeli concessions to the Palestinians.

As the American Thinker’s Jeannie DeAngelis points out, former George Soros executive Gary Gladstein coincidentally “sits on the ‘One Voice’ Honorary Board of Advisors.”

So much for President Obama’s avoidance of “inappropriate” influence on another country’s elections.

For Obama, denying reality goes well beyond refusing to hear Netanyahu’s warning about Iran. Documented tales of the Taliban’s Shariah law practices — such as cutting off the thumb of a woman wearing nail varnish and shooting dead eight teenagers for laughing — are legion.

But this week, two White House spokesmen insisted that the Taliban is not a terrorist organization.  They have to, because the Taliban will soon return to power in Afghanistan, and Obama’s U.S. troop pullout can’t be seen as empowering terrorists.