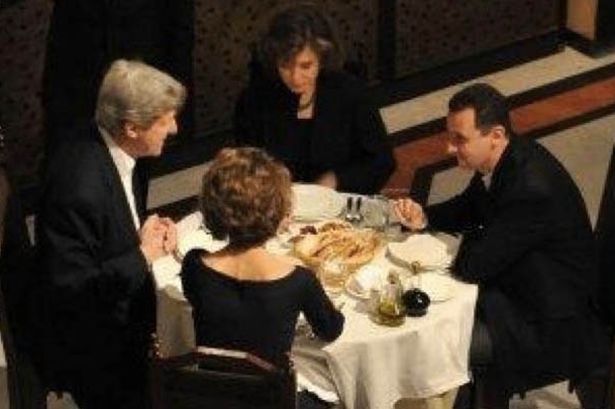 June 20, 2013 7:28 pm 0
The Assad Regime Non-Survival Rationale
What Hafez May Have Told Baschar on His Death Bed
How to Counter the Russian Propaganda Machine

To decipher power plays of appeasers, Georgetown University should begin teaching this example to its foreign relations program students. It shows how Secretary Kerry willing to start a war to look like a peacemaker.

In a leak that blindsided Secretary John Kerry, Bloomberg reporter Jeffrey Goldberg details a Situation Room confrontation between Kerry and JCS Chairman Gen. Dempsey to shed a light on the John Kerry the American public never met before. Secretary Kerry willing to start a war to look like a peacemaker in an effort he knows his buddy Baschar al-Assad would torpedo at every turn. Hey, Nobel Peace Prizes are awarded before any effort and for effort too.

At a principals meeting in the White House situation room, Secretary of State John Kerry began arguing, vociferously, for immediate U.S. airstrikes against airfields under the control of Bashar al-Assad’s Syrian regime — specifically, those fields it has used to launch chemical weapons raids against rebel forces.

It was at this point that the current chairman of the Joint Chiefs of Staff… spoke up, loudly. According to several sources, Dempsey threw a series of brushback pitches at Kerry, demanding to know just exactly what the post-strike plan would be and pointing out that the State Department didn’t fully grasp the complexity of such an operation.

Dempsey informed Kerry that the Air Force could not simply drop a few bombs, or fire a few missiles, at targets inside Syria: To be safe, the U.S. would have to neutralize Syria’s integrated air-defense system, an operation that would require 700 or more sorties. At a time when the U.S. military is exhausted, and when sequestration is ripping into the Pentagon budget, Dempsey is said to have argued that a demand by the State Department for precipitous military action in a murky civil war wasn’t welcome.

On the surface, Kerry looked like an uninformed fool; deeper though lies the goal of a self-indulging narcissist.

Kerry is the architect of the Geneva Conference on Syria in which the Assad regime sits face-to-face with the rebels to decide Syria’s future. And even though many experienced negotiators will tell you that peace negotiations in which one or two parties are unwilling participants tend to fail far more often than succeed, Kerry is persistent. The easiest thing to do during any peace negotiations is to walk out for everything to fall apart.

Since the battle of Qusayr, the Assad regime has been a reluctant participant refusing to meet if the rebels impose any pre-conditions. The rebels have been demanding a guarantee that Assad will not seek to preside over the country he destroyed prior to participating in Geneva. This impasse has frustrated Kerry who traveled to Moscow to attempt to break it only to walk away disappointed and humiliated after Putin refused to accommodate any American concepts (Putin kept Kerry waiting for 3 hours outside his office to finally hear a Nyet).

Having failed in the Kremlin, Kerry turned his attention inward. The morning of June 12, when the Situation Room meeting took place, Kerry wore John Wayne’s hat for one reason only: To force all parties into meeting in Geneva. Trying to force the issue by involving the US military haphazardly shows the distance this Secretary of State is willing to go to promote himself as an appeaser.

If there was ever a concocted power play appeasers deceive us with students preparing to become Foreign Service Diplomats need to study, here is one for the records. A Secretary of State was willing to place US troops in harm’s way just so he can take credit for a conference that will fail no matter what angle you use to scope it.

Don’t you love the deceptive practices of appeasers? At the end, all they care about is their own reputation and narcissist values.