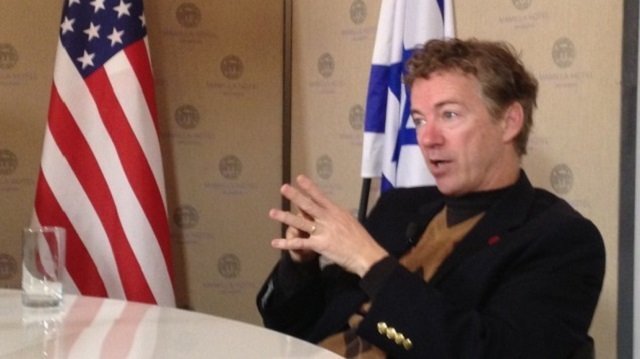 What is next for Senator Rand Paul? Israel?

June 21, 2013 10:25 am 0
Big Trouble for Israel Ahead
Why Assad Should Ask for STL Indictments
The Alawites of Syria Have Committed to Israel Destruction

Libertarians have much to be proud about when it comes to their views of fiscal responsibility and small government that we wholeheartedly agree with.

However, when it comes to foreign policy, Libertarians sometimes look like characters from a Tolkien novel for their beliefs that America’s greatness can be sustained to be a beacon for freedom and economic power at home if America shrinks from its responsibilities overseas by cocooning, hibernating, or, the worst scenario, by yielding to other superpowers her influence.

A bipartisan group of senators have introduced legislation to block the U.S. from escalating its involvement in the Syrian civil war as concerns mount on Capitol Hill over the Obama administration’s plan to directly arm the rebels.

What begins with Syria may end in yielding to Russia or China regions that America sacrificed much to influence with its values. The less influence the US can muster abroad, the less powerful it becomes at home. Why do you think Putin is challenging the world on Syria?

Further, ask any economist about the success of US multinationals, which affect R&D and investments at home, and do not be surprised if he/she ties it partially to US influence abroad. Here is a study that shows how positive the influence of multinationals on the country of origin that we suspect Senator Rand Paul never read.

The Soviet Union collapsed because President Reagan exercised US influence and power wisely, not because Reagan believed that we should not concern ourselves by what the Soviets do or do not.

What would have happened to all the Soviet Jews in the Gulags had Reagan been a Libertarian? What will happen to the Argentinian Jews the next time Hezbollah bombs another AMIA or the Israeli Embassy as it did in 1992 and 1994?

Potential Presidential candidates running for office read the polls before they commit to their platform and message. Arming the Syrian rebels to defend against the biggest terrorist operations the world has ever witnessed in Iran and Hezbollah trails, in the minds of Americans, “WMD in Iraq”.

Without understanding the consequences, the latest polls show that Americans are opposed to getting involved in Syria even if US boots are not required on the ground, which may explain Senator Rand Paul opportunism by making this issue a springing board for national attention.

However, there are many other issues the Senator could have adopted (i.e. The IRS scandal, Benghazi, the latest US State Dept. cover-ups, NSA data mining, DOJ and the 2nd Amendment, protecting whistleblowers, etc.) that would have yielded him much political credit if you read the polls on these issues.

So why Syria? Because Senator Rand Paul believes the US has no business playing the globalist role.

What is next for Senator Rand Paul? Israel?

ARABS MUST DECIDE
To Defeat Assad, We Have to Defeat Obama
Kerry’s ignorance is simply astounding
Opinions 1017 Syrian Revolution 1335