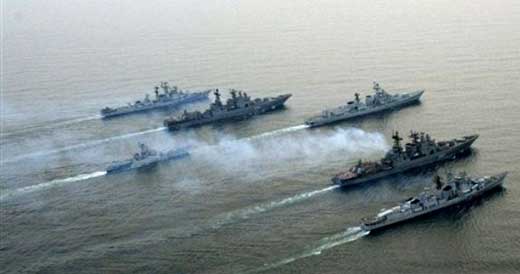 Russia sends warships toward Syria via the English Channel — and with them, a message

Source: The Washington Post – by By Karla Adam, Michael Birnbaum and Andrew Roth (Russia sends warships toward Syria via the English Channel — and with them, a message)

LONDON — In scenes that haven’t been common since the end of the Cold War, Russian warships sailed through the English Channel early Friday in a theatrical display of Russian military might.

Britain dispatched two of its own warships to carefully monitor the Russian flotilla, which included the aircraft carrier Admiral Kuznetsov, as it sailed by, reportedly en route to the eastern Mediterranean to aid in the war in Syria.

The aircraft carrier can hold as many as 40 planes, and it is suspected that they will be used in the bombing campaign in the Syrian city of Aleppo.

Given Russia’s fierce bombardment of that city, many Western military officials see the ships’ course as a slow-moving harbinger of bloodshed to come in Syria. NATO Secretary General Jens Stoltenberg warned the Kremlin on Thursday not to take any step that would escalate the violence.

“We are concerned that the Russian carrier group will support military operations in Syria in ways which will increase humanitarian and human suffering,” Stoltenberg said.

In Britain on Friday, there was widespread coverage of the Russian fleet sailing near English waters. British Defense Secretary Michael Fallon said that it would be marked “every step of the way” as part of the government’s “steadfast commitment to keep Britain safe.”

It is routine for Britain’s Royal Navy to shadow ships, but the route taken by the Russian convoy — through the English Channel — was not routine.

“There’s huge amounts of theater here,” Paul Beaver, an aviation historian, told the BBC. He said that normally the Russians would “go around the top of Scotland, down past Hebrides, past Ireland on a deployment, and actually that’s probably the quickest route. This is very much about power play…. They want to be seen to be doing these things.”

And seen they were. Several British television stations broadcast footage of the carrier billowing black smoke as it sailed through international waters between Britain and France.

Jonathan Eyal, director of international security studies at the Royal United Services Institute in London, said the passage through the English Channel in particular was a clear message from the Russians that “they are back” and that “anything you can do, we can do as well,” he said.

Analysts said that the move was an intentional snub toward Britain as one of Europe’s most vocal critics of Russia’s role in Syria.

“It was thanks to the U.K. that Russian action in Syria was on the agenda for this summit,” British Prime Minister Theresa May said, referring to a summit of the European Union’s 28 leaders Thursday and Friday. “It is vital that we keep up the pressure on Russia to stop the assault on Aleppo,” she told reporters.

But so far, Russia’s opponents have proven too divided to respond with any concrete measures. NATO has no plans to get involved, and at the E.U. summit, France, Germany and Britain failed to reach the unanimity required to put sanctions on the table over Russia’s actions in Syria. Diplomats warned that could change if Russia continues to contribute to Aleppo’s bombardment.

“If Russia continues its airstrikes, it would expose itself to a response that the union would decide on, but we’re not there,” French President François Hollande said Friday after a meeting that was focused on Europe’s deteriorating relationship with the Kremlin.

Russia has taken steps in recent weeks to reestablish itself as a permanent power in the Middle East and in the Mediterranean, ratifying an open-ended agreement to lease Syria’s Khmeimim air base and declaring that it will upgrade its naval facility in the Syrian port town of Tartus to a permanent naval base. The Kuznetsov will add to the firepower, both offensive and defensive, that Russia has concentrated in the region.

Aircraft flying from the Kuznetsov will increase the payload raining down daily on east Aleppo, especially if the carrier bears a full load of 40 aircraft, likely matching the current complement already on the ground.

Built during the Soviet era and launched as the Leonid Brezhnev, the aircraft carrier has deployed to the Mediterranean a total of five times during its 26 years in service, most recently in 2014. But this would be the carrier’s first combat deployment off Syria, where a Russian and Syrian blitz on the rebel-held eastern part of Aleppo has brought that city to its knees.

Russia sends warships toward Syria via the English Channel — and with them, a message

Will China Test its Weapons in Syria Too?
As If Syria No Longer Exists, Or Exists for a Sinister Purpose
Putin and Assad Carry Out Daily Cluster Bomb Attacks
Putin Terror 434 Slippery Barack Obama 971 Syria News 1199 Western Appeasement 474