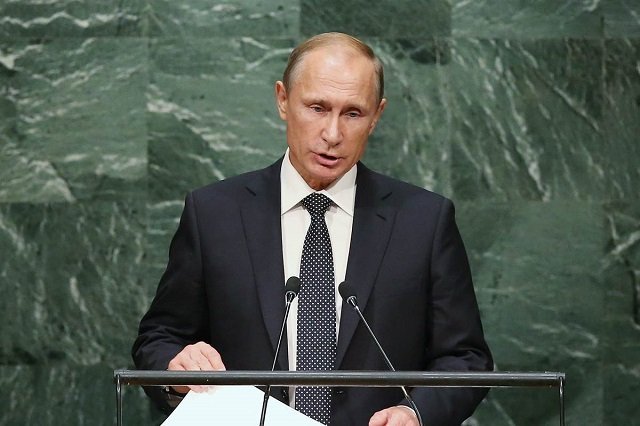 When Putin stands at the U.N. to claim the high road with regard to defeating Islamic terror, who could resist such a call against the barbarians beheading the innocent? Who could resist defending Putin?

But when he refuses to address the Assad terror against women and children, his barrel bombs deliberately targeting civilian populations, and Assad prisons full of young Syrians whose only sin was to march peacefully against his regime in 2011, he loses all that credibility.

Putin’s war against Islamic terror is disingenuous because it targets one kind of terror while supporting another. Real leaders who fear and abhor terror have a responsibility to strike every terrorist, not just the politically convenient ones.

Governments and organizations advocating for Putin’s approach to justify his invasion of Syria are doing so to outsource Syria’s problems. Ever since the Syrian civil war erupted in late 2011, most politicians have been passing the Syrian hot potato to each other. No one wants to take responsibility for fear it may blow in his/her face. Putin is stepping up not because he wants to defeat terror, but rather to save the Assad terror that was on the brink of collapsing.

For Putin, it is not about terror. It is simply about protecting Russian interests in the region. When it comes to those interests, the Soviet/Russian investment in the sociopath Assad family goes back to 1957 when Assad père first landed in Moscow as part of a contingency of new Syrian air pilots training to fly the Soviet MiG jets.

Next time you hear Putin claim his mission is to defeat Islamic terror, consider his close alliance with the genocidal Assad and the Muslim terror masters in Tehran before you render an opinion.