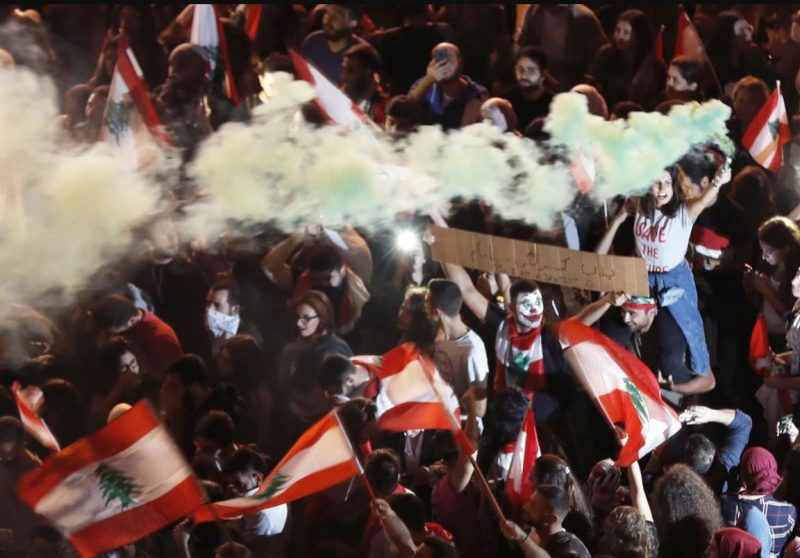 Lebanon’s pro-Hezbollah corrupt president pleaded Thursday with tens of thousands of protesters who have blocked main roads and paralyzed the nation for days. He urged them to back economic reforms proposed by the prime minister as the “first step” toward saving the country from economic collapse. As protests in Lebanon target Hezbollah, they also are targeting the whole system.

The protesters, however, have already rejected the initiative. As the protests entered their second week with banks, schools and public institutions shuttered, the country appeared headed for a protracted crisis with no clear roadmap for a solution.

Like most young protesters flooding Lebanon’s streets to vent their fury over joblessness and inequality, Nina Sabbah demands more than the government’s hastily announced reforms if she is to back down.

She wants to end a political system where what job you get depends on who you know and what religion you belong to.

All the protesters are united behind anti corruption by some 30 families that rule Lebanon. To top them is President Michel Aoun that Hezbollah backs. These families have milked the system to enrich themselves since the end of the civil war.  Some targeted names began surfacing in local media.

Demonstrations dominated by young faces have paralyzed the country in recent days. It forced Prime Minister Saad al-Hariri’s government to rush out measures aimed at quelling anger. Lebanese economy is diving in free fall. Many, though, want to unseat the whole government.

The reforms, which include slashing the salaries of top officials and imposing taxes on banks, have not appeased demonstrators. Many of them quite young. The official unemployment rate for those aged under 35 in 37%.

Protesters like Sabbah, a Shi’ite Muslim from the south, say they have shed religious affiliations to join a broad protest movement that has cut across sectarian lines, challenging a system they say fuels inequality, nepotism, and corruption.

It’s a country where which sect or which political leaders you belong to secures you a job. Everyone has reached a point where we cannot take it any more. We are unified in our outrage.

She added that she’s joined Muslim Sunnis, Christians, and Druze in expressing her rage at the country’s elite.

Lebanon’s power-sharing system based on 18 recognized religious sects dates back to French colonial rule. It allocates posts for each of the country’s communities and forming the basis of its major political parties.

I’ve come to bring down the sectarian-based regime and replace it with a political system where people get positions based on competence, not sect.

Protesters say the system affects everyday life. It determines everything from university appointments to religious quotas in the country state institutions.

We don’t want anyone to use our sect to determine whether we pass our exams or get a job.

Lebanon’s economy was once likened to the Switzerland of the Middle East. It had a sophisticated banking sector and a thriving tourism industry.

But spiraling debt and donors’ increasing reluctance to bail out the economy have triggered an economic crisis. Its once affluent middle class has been decimated and many young people see moving abroad as the only way to get ahead.

Like most Arab countries, the demographics of Lebanon’s roughly 4 million skew heavily toward the young: about 40% of its highly educated population is under the age of 25.

There’s no work here in Lebanon. It’s just exhaustion. If any opportunity comes to leave Lebanon, I will take it.

Protests that have gripped Lebanon for the past week, with their chants for revolution and the downfall of the regime, echo the 2011 Arab revolts that unseated four Arab leaders and the past year’s uprisings in Algeria and Sudan.

Farah Baba, a university youth activist whose group has camped near Riyad Solh square in central Beirut where protesters have converged, said:

The Arab revolts all had one dictator, but in Lebanon we have one hundred.

Protests across the country have seen people break taboos by burning pictures of leaders of their own sects and, unusually, chanting against Hezbollah leader Sayyed Hassan Nasrallah, the most powerful figure in Lebanon.

They have broken the barrier of fear by attacking symbols of their politicians and leaders of their sects.

That does not bode well for Hezbollah, the most powerful sectarian organization. Many countries consider Hezbollah to be a terrorist organization loyal to Iran, not Lebanon.

Some people say their fight is to erase the legacy of a 15-year civil war that began in 1975 and pitted Muslims, Druze, and Christians against one another.

The peace agreement that ended the war shifted the balance of power among the sects, with Christians losing some prerogatives, but left the confessional system in place.

As tens of thousands of demonstrators hoisting the Lebanese flag fanned out across Lebanon, activists have urged protesters to leave sectarian symbols and party flags at home.

A truck rallying protesters in central Beirut, engulfed in a sea of red and white national flags, had on its sides a simple message: “It’s time for change.”

They have discovered that the party they were chanting for, whose leaders’ posters they carried, do not care about them.

Again, Hezbollah is their target.