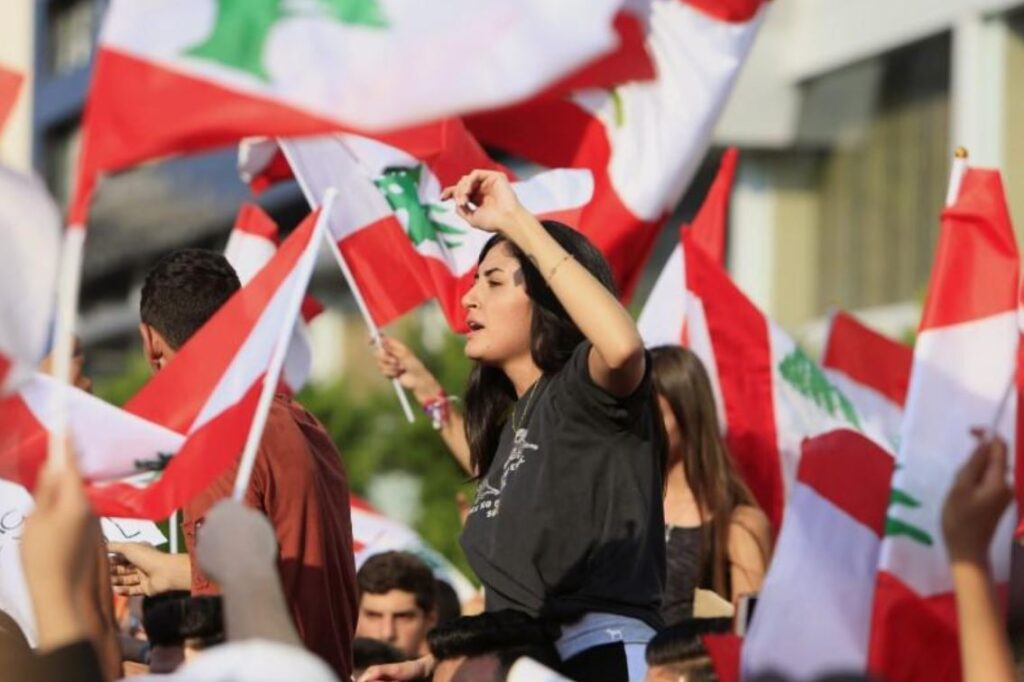 Hezbollah Mismanagement and Corruption in Lebanon

Because of Hezbollah mismanagement and corruption, tens of thousands took to the streets of Lebanon on Saturday for a third day of anti-government protests, directing growing rage at a political elite they blame for entrenched cronyism and driving the country to the economic brink.

In central Beirut, the mood was fiery and festive, with protesters of all ages waving flags and chanting for revolution outside upmarket retailers and banks that had their store fronts smashed in by rioters the night before.

From the south to the east and north of Lebanon, protesters marched and blocked roads to keep the momentum going despite gunmen loyal to the Shi’ite Muslim Amal movement appearing with firearms to scare them away.

The latest unrest was sparked by anger over the rising cost of living and new tax plans, including a fee on WhatsApp calls, which was quickly retracted after protests – the biggest in decades – broke out.

In an attempt to appease demonstrators, Lebanon’s finance minister announced following a meeting with Prime Minister Saad al-Hariri that they had agreed on a final budget that did not include any additional taxes or fees.

Lebanese President Michel Aoun said in a tweet there would be a “reassuring solution” to the economic crisis. Aoun is Hezbollah’s designated president. Most of the protests aimed at his corruption.

The protests followed a build-up in grievances over perceived government corruption, mismanagement of funds and a failure to address high unemployment.

HEZBOLLAH MISMANAGEMENT AND CORRUPTION IN LEBANON

The protesters spared no leader, Christian or Muslim. It created a rare unity in a country riven by sectarianism.

At night, patriotic songs blared from loudspeakers in Beirut and fireworks exploded over a sea of people dancing and singing, holding banners reading “unite against corrupt politicians”.

Mohammad Awada, 32, who is unemployed, said:

This country is moving towards total collapse. This regime has failed to lead Lebanon and it must be toppled and replaced.

Prime minister Hariri gave his government partners a 72-hour deadline to agree on reforms that could ward off economic crisis. He hinted he may resign.

In a televised speech addressing the protests on Saturday, Hezbollah leader Sayyed Hassan Nasrallah said the group was against the government resigning, and the country did not have enough time for such a move given the acute financial crisis.

Nasrallah, head of Hezbollah, said in a Television speech:

Hezbollah controls the levers of government.

The protests that swept villages and towns across Lebanon recall the 2011 Arab revolts that toppled four presidents.

The Hezbollah leader said he recognized the protests were “honest and spontaneous”. He warned that his heavily-armed and powerful group, which backed the president’s rise to power, would not permit his downfall.

In southern Lebanon, Amal militiamen loyal to parliamentary speaker Nabih Berri attacked peaceful demonstrators who tore his posters and chanted slogans denouncing him as corrupt. They prevented TV crews from filming the protests.

In the speech, Nasrallah predicted that imposing more taxes would lead to an “explosion” of unrest.

If we don’t work towards a solution we’re heading towards a collapse of the country, it will be bankrupt and our currency will not have any value. The second danger is a popular explosion as a result of wrong handling of the situation.

Hezbollah has proven to be more of a terrorist organization than a political one. It’s under its control that Lebanon reached the brink of economic collapse.

Protesters from across the political spectrum filled the streets.

I am taking part because over the last 30 years warlords have been ruling us. I am about to be 30 and my parents still tell me tomorrow will be better, and I am not seeing better days ahead. We want back the money they stole because 30 families are ruling five million people. We won’t accept this any longer.

Fadi Dhaher, 21, a university student, said his generation felt they had no future.

We are protesting because we don’t want to emigrate … they are pushing us to leave our country.

Government sources said the cabinet might hold an emergency meeting on Sunday to discuss a way out of the crisis.

The budget could help it unlock billions of dollars pledged by international donors. The funds, however, are conditional on long-delayed reforms to curb waste and corruption.

Reuters contribute to this article

Hezbollah Mismanagement and Corruption in Lebanon