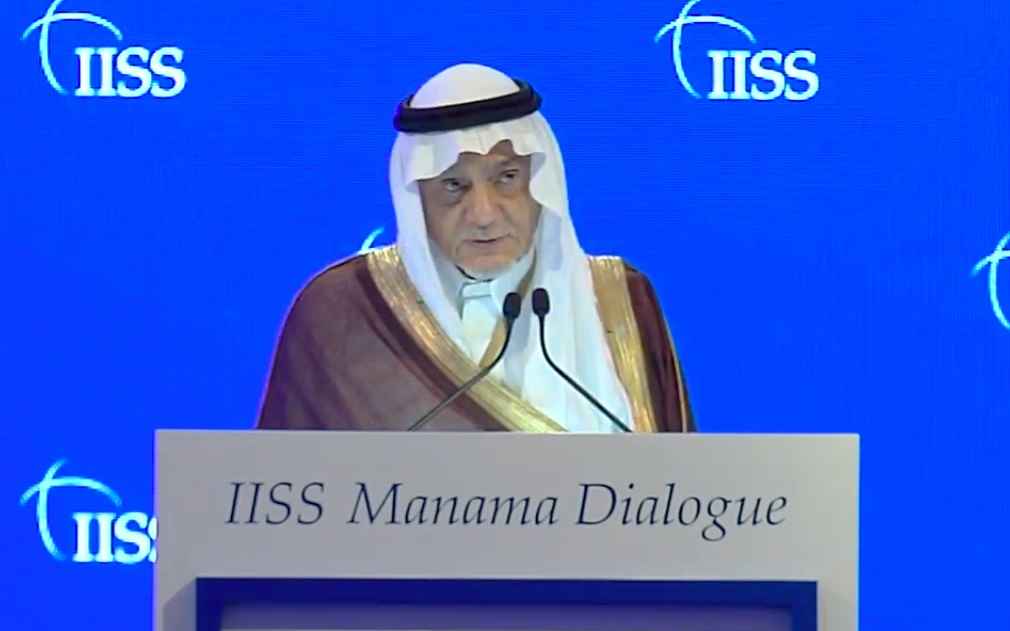 December 7, 2020 6:34 am 0
Barbaric Hezbollah is Turning Lebanon into a Mini Iran
Time for Saudi Air Force to Strike Iran in Syria
Riyadh Presenting the World 65 Alternatives to Assad

A prominent Saudi prince harshly criticized Israel on Sunday at a Bahrain security summit that was remotely attended by Israel’s foreign minister.

Prince Turki al-Faisal, who led Saudi intelligence for more than two decades and served as ambassador to the U.S. and U.K., said any normalization deals needed to help the Palestinians obtain their own independent state.

He described Israel as a “Western colonizing” power. He said Israel has “incarcerated (Palestinians) in concentration camps under the flimsiest of security accusations— young and old, women and men, who are rotting there without recourse to justice. They are demolishing homes as they wish and they assassinate whomever they want.”

Although the prince does not hold any official position, his stance is seen as closely mirroring that of King Salman. In contrast, Saudi Crown Prince Mohammad bin Salman has signaled greater willingness to quietly engage with Israel to counter common rival, Iran, and boost foreign investment in the kingdom.

NORMALIZATION AS PART OF TWO-STATE SOLUTION

Saudi Arabia has insisted that any normalization between it and Israel can only happen alongside a lasting peace deal involving a two-state solution to the Israeli-Palestinian conflict. The kingdom publicly continues to state its unwavering support for the Arab Peace Initiative, a 2002 Saudi-sponsored deal that offers Israel full ties with all Arab states in return for Palestinian statehood on territory Israel captured in 1967.

I would like to express my regret on the comments of the Saudi representative. I don’t believe that they reflect the spirit and the changes taking place in the Middle East.

The confrontation and a later back-and-forth between Prince Turki and a confidant of Israeli Prime Minister Benjamin Netanyahu during the summit highlighted continued widespread opposition to Israel by many inside Saudi Arabia; despite some state-backed efforts to promote outreach with Jewish groups and supporters of Israel.

Ashkenazi, meanwhile, reiterated Israel’s position. Mainly that it is the Palestinians who are to be blamed for not reaching a peace deal.

We have a choice here with the Palestinians whether to solve it or not, or to go to this blame game.

BACK AND FORTH ACCUSATIONS

Dore Gold, a Netanyahu confidant and former U.N. ambassador in the audience, implied Prince Faisal’s remarks were “accusations of the past — many of which are false.”

The prince later brought up Gold’s previous television appearances “denigrating the kingdom and using the most vile descriptions.”

I think Mr. Dore Gold should be the last one to talk about having previous beliefs and positions here.

Prince Turki led Saudi intelligence for more than 20 years and served as ambassador to the U.S. and United Kingdom. Though he now holds no official position, his stance mirrors closely that of King Salman. However, the king’s assertive son, the 35-year-old Crown Prince Mohammad bin Salman, is more willing to quietly engage with Israel to counter common rival, Iran, and boost foreign investment in the kingdom.

Bahraini Foreign Minister Abdullatif al-Zayani, also on stage for the tense exchanges, sought to smooth over the differences in his remarks. Still, he too stressed the importance of a resolution to the Palestinian-Israeli conflict based on a two-state solution as envisaged by the Arab Peace Initiative.

In an apparent reference to Iran, al-Zayani added that a resolution to the conflict would also remove the pretext to justify some of the threats made to regional security.