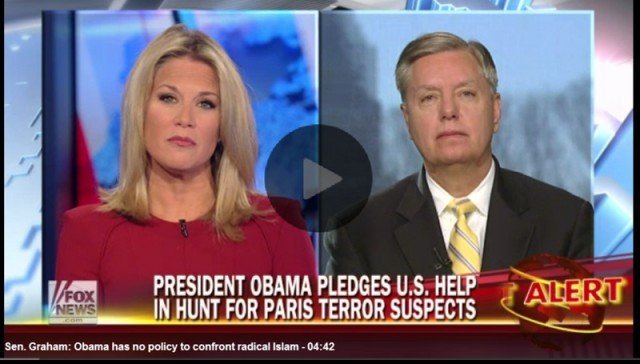 (FoxNews) – The terror massacre in Paris has rekindled concerns in Washington that weakened intelligence capabilities, budget cuts and changes in detention policy have left the United States increasingly vulnerable to an attack.

Lawmakers are now pointing to the Islamist terrorist attack in France in urging President Obama to reverse course and shore up American intelligence-gathering before he leaves office.

“This should be a wake-up call to the Congress and the president,” Sen. Lindsey Graham, R-S.C., said of this and other developments. “President Obama’s policies are making us less safe. … It’s just a matter of time that we’re going to get [hit] here at home if somebody doesn’t adjust soon.”

Graham and other critics complain U.S. intelligence-gathering has suffered in recent years, and accuse the administration of treating enemy combatants as common criminals with its interrogation and detention policies.

“He has criminalized the war,” Graham told Fox News.

One factor is changes made in the wake of the Edward Snowden leaks on National Security Agency surveillance. The revelations of the agency’s pervasive data collection raised bipartisan concerns about intelligence agencies trampling civil liberties, and the programs were curtailed.

But even intelligence officials inside the Obama administration warn these changes will come at a cost.

“Just acknowledge the fact that we as a nation are accepting more risk. We are not as safe and secure as we used to be,” Director of National Intelligence James Clapper said Wednesday, speaking at a cybersecurity conference at Fordham University in New York City.

Without addressing the Paris attacks specifically, Clapper explained the Snowden leaks have changed the way terrorists operate, as they “went to school” on U.S. methods.

“We are having much more difficulty tracking the activities of terrorists,” he said. He addressed the challenge of having to gather high-quality intelligence while also curtailing collection activities and dealing with budget cuts — and being mindful not to infringe on civil liberties or do anything that, if revealed, could cause embarrassment.

“We call this new paradigm immaculate collection,” Clapper said, to laughter from the audience at the Jesuit-affiliated school.

The overall federal budget for intelligence activities has fallen since 2010, when it peaked at $80 billion. It dropped to $63 billion last year and ticked up to $66 billion for fiscal 2015.

The number includes the budgets for both military intelligence and the rest of the intelligence community, comprising the CIA and other agencies.

Graham urged funding be restored for the U.S. intelligence community. “When you limit your ability to gather intelligence about what they’re up to, you open yourself up to an attack,” he said.

“We have to be able to go in there and find out what’s happening so we can be tipped off and not stand back and treat all communities as if they’re the same,” King told Fox News. “If it’s Islamist terrorism, we have to have more surveillance in those communities.”

The Obama administration has consistently defended both the reforms to intelligence-gathering and the changes in detention and interrogation policies.

A recently released Senate report blasted the CIA’s harsh interrogation methods such as waterboarding. In the wake of that report, Obama said those practices were “contrary to our values,” which is why he “unequivocally banned torture.” He said the harsh tactics “did significant damage to America’s standing in the world and made it harder to pursue our interests with allies and partners.”

The president also maintains that shuttering Guantanamo is a security priority.

After the Paris attack, White House Press Secretary Josh Earnest said U.S. security analysts are “working around the clock to try to protect the American people and American interests both here at home and around the world.”

The attacks could renew concerns about the flow of legal and illegal immigrants into the U.S., particularly from nations that are terror hotbeds. But the attacks also have bolstered arguments for Department of Homeland Security funding, at a time when some Republicans are mulling using the DHS budget as leverage to stop Obama’s recent immigration executive actions.

King warned his fellow Republicans Wednesday that “whatever we do on that as far as immigration cannot in any way be allowed to interfere with our counterterrorism methods.”