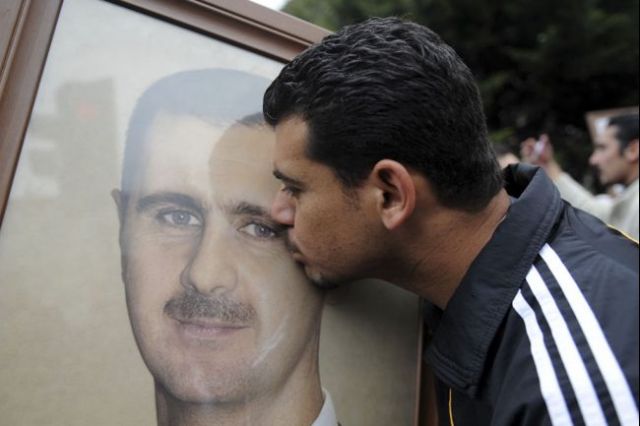 October 20, 2013 3:27 am 0
Brutality, Cruelty, and Impartiality
What Assad Fears is What the US Avoids Like the Pest.. Go Figure
Assad Fires Missiles on Civilians, World Ignores His Crimes

The plan hammered out by Mr. Kerry with Mr. Lavrov to dispatch CW inspectors to Syria is working like a charm; a Swiss clock of precision and trouble-free operation in spite of a raging civil war.

However, inspectors to deliver humanitarian aid to starving Syrian children, well this is not something either Mr. Kerry or Mr. Lavrov feel they are responsible for. It is really none of their business when you think about it. A peace conference in Geneva while children are starving and snipers are killing pregnant women is the best Mr. Kerry can do under the circumstances right now. Mr. Putin has tied Mr. Kerry’s hands behind his back and Mr. Kerry is finding it difficult to admit it publicly, so he pursues a peace conference no one wants to attend.

When Assad, a savage in his own right, watches the world ignore the plight of our women and children, do you blame this wonder doctor with traces of Hitler’s DNA for his actions? He is just doing what he does best after all and the fact Mr. Obama and Mr. Kerry are totally ignoring the Genocide happening under their nose does not make it go away. Today’s history, under their leadership, is written with the blood of children and women they ignored and Assad is the one reminding them of their incompetence on the world stage, not the Syrian people dying like flies.

When the Fatwa permitting starving children and women to eat dogs, cats, and donkeys in the three districts the Assad forces have besieged for months made its round around the world, it caught the US State Department off-guard and flat-footed. On Friday, Jen Psaki responded to the starving of children by issuing an ultimatum that I am guessing made Assad shiver with fear:

“We call on the Syrian regime to immediately approve relief convoys”¦ those who are responsible for atrocities in the Damascus suburbs and across Syria must be identified and held accountable”.

Exactly the way Mr. Obama held Assad accountable few weeks ago when he bombed his forces, airports, SCUD missiles, and command and control centers. “Operation Kiss Assad”, if you recall, was a thing of beauty, was it not? It demonstrated real leadership on the part of the President of the United States. I have already heard rumors that war colleges around the world are planning to introduce “Operation Kiss Assad” as a standalone course and I am told even Putin has been mesmerized by its precision and outcome.

If you have not guessed already, “Operation Kiss Assad” is about showing love and compassion to mass murderers. It is unprecedented in the scope of its vision because for the first time humankind directs its attention towards those who need us the most. Standing by victims of war crimes was a bore for many and I was beginning to think this world is hopeless. Until Mr. Obama appeared on the world stage with his message of hope and change, then I told myself “No more victims, only mass murderers, thank G*d and thank Obama”.

We think we should ask Chicagoan Alexander Calder to sculpt something to celebrate Obama’s foresight. The future Presidential Library of Mr. Obama could use some red, the color of the paint dripping from the veins of Syrian children.

Meanwhile, the Saudi snubbing of the UN continues to gain momentum. The Gulf Cooperation Council just voted to back Saudi Arabia’s rejection of the declining-in-value UN seat on the Security Council and it would not surprise us if the Arab League follows suit with possibly other third world countries as well. If this becomes South vs. North or emerging nations vs. developed nations type of breakdown, as Putin has planned it and Obama has missed it, we should have two sculptures made of Mr. Obama to celebrate his vision and this momentous occasion.

Just in case you wonder what Syrian children are eating now, carve yourself a dog steak this afternoon and salivate no more.