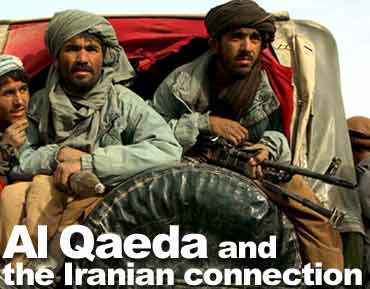 The allegation by the Treasury Department on Thursday would suggest that elements of Iran’s government or military were at least tacitly supporting the opposing sides of Syria’s civil war.

U.S. officials, however, have intermittently accused Tehran and the IRGC of colluding with Sunni militant groups, who historically are enemies of Tehran’s Shiite government, but also are fighting the U.S. and its allies.

Iran’s government nearly went to war with the Taliban in 1998, when they governed Afghanistan, after Taliban killed nearly a dozen Iranian diplomats in the city of Mazar-i-Sharif.

The Treasury sanctioned a senior Uzbek member of al Qaeda, Jafar al-Uzbeki, for allegedly using Iran to move fighters into Syria. The U.S. said Mr. Jafar is part of an al Qaeda network operating from Iran that has also moved fighters into Pakistan and Afghanistan “and operates there with the knowledge of Iranian authorities.”

“The network also uses Iran as a transit point for moving funding and foreign fighters through Turkey to support al Qaeda-affiliated elements inside Syria,” including the Nusra Front, the Treasury said.

The Nusra Front has emerged as one of the Sunni militias challenging Mr. Assad’s regime. U.S. officials said they weren’t certain that Iran’s government was aware of the al Qaeda member’s involvement in Syria, even though they believed Tehran was aware that he was operating in Iran.

Iran’s foreign minister, Javad Zarif, denied during a talk in Davos, Switzerland, in January that Iran’s government or the IRGC is in any way supporting al Qaeda, the Taliban or other Sunni militant groups. “It would be preposterous to claim Iran, which is a target of al Qaeda, is backing them,” he said.

The Obama administration has increasingly sought to gain Iran’s support in ending Syria’s civil war, which is estimated by the United Nations to have killed at least 130,000 people.

The U.S. hoped at one point that Iran would attend talks in Geneva aimed at ending the war. But Washington pulled its support for Iran’s attendance after Tehran refused to commit to establishing a transitional government to replace Mr. Assad.

U.S. officials have said that cooperation with Tehran on Syria is complicated by what they believe are significant divisions inside the Iranian government. Iranian policy on Syria, they said, is in the hands of the IRGC, not with President Hasan Rouhani or the Foreign Ministry.

Secretary of State John Kerry sought to discuss Syria with Mr. Zarif last week on the sidelines of an international security conference in Munich, a senior U.S. official said, but Mr. Zarif said he didn’t have the authority to discuss the Syrian conflict with his American interlocutor.

U.S. officials said they have been perplexed in recent weeks by the Assad regime’s tactics in fighting its largely Sunni military opponents and al Qaeda.

U.S. officials have said they have picked up intelligence in recent months suggesting the Assad regime was buying oil from the Islamic State of Iraq and al-Sham, one of the most powerful Sunni militias in Syria’s north, and holding back from bombing the group’s offices in Rakka province.

U.S. officials said they didn’t believe Damascus was coordinating with ISIS. But some believe Damascus has been seeking to use the militia to further undermine other rebels. ISIS has been fighting more secular opponents of Mr. Assad for control of Rakka and other parts of Syria.

Syrian officials have denied any ties to ISIS or al Qaeda, and have accused the U.S., Saudi Arabia and Turkey of supporting these groups.