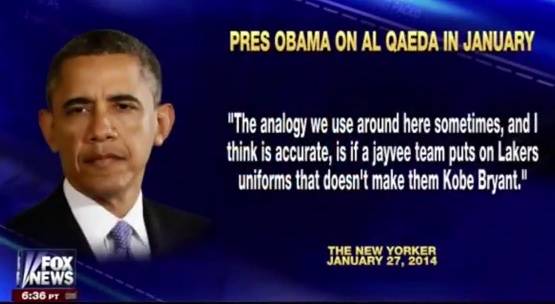 May 19, 2015 9:34 am 0
America is Governed by Masochistic Men Who Lost Their Cojones
Barack Obama Is Complicit With Assad Siege of Madaya
Two Americans Killed in Brussels Terror Attacks

Fox News has reported on the legal outcome of a Judicial Watch lawsuit in which the organization discovered the Defense Intelligence establishment has warned of the rapid rise of ISIS 17 months before Obama told the American public not to be too concerned about ISIS.

Obama knew ISIS JV comment was a Lie. How many times does our president need to lie in order to avoid protecting the U.S.?

Obama’s unwillingness to defend U.S. interests led to ISIS monumental expansion, which forced Obama to start a new war anyway. Any lessons from this when it comes to Iran? We doubt it.

Here is the full text Fox News published on its website:

Seventeen months before President Obama dismissed the Islamic State as a “JV team,” a Defense Intelligence Agency report predicted the rise of the terror group and likely establishment of a caliphate if its momentum was not reversed.

While the report was circulated to the CIA, State Department and senior military leaders, among others, it’s not known whether Obama was ever briefed on the document.

The DIA report, which was reviewed by Fox News, was obtained through a federal lawsuit by conservative watchdog Judicial Watch. Documents from the lawsuit also reveal a host of new details about events leading up to the 2012 Benghazi terror attack — and how the movement of weapons from Libya to Syria fueled the violence there.

The report on the growing threat posed by what is now known as the Islamic State was sent on Aug. 5, 2012.

The report warned the continued deterioration of security conditions would have “dire consequences on the Iraqi situation,” and huge benefits for ISIS — which grew out of Al Qaeda in Iraq.

“This creates the ideal atmosphere for AQI (Al Qaeda in Iraq) to return to its old pockets in Mosul and Ramadi,” the document states, adding “ISI (Islamic State of Iraq) could also declare an Islamic state through its union with other terrorist organizations in Iraq and Syria, which will create grave danger in regards to unifying Iraq and the protection of its territory.”

ISIS would, in June 2014, go on to declare a caliphate in territory spanning Iraq and Syria, in turn drawing more foreign fighters to their cause from around the world.