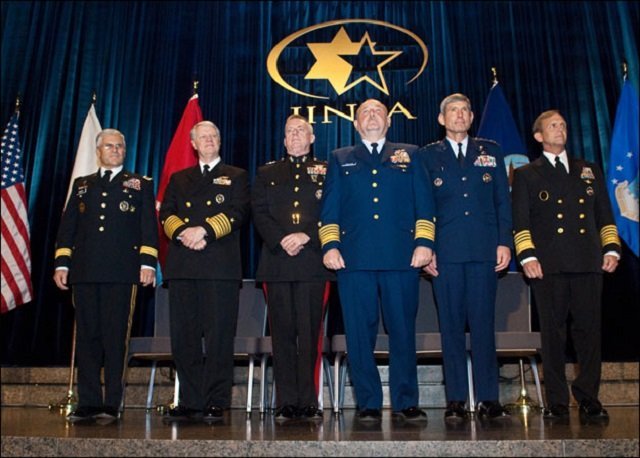 August 27, 2015 2:42 am 0
Democratic Discontent with Obama’s Syrian Policy Growing in Congress
Congress Must Reject Deal to Avoid Future War With Iran
Obama To Release Jonathan Pollard Only If Congress …

A group of nearly 200 retired generals and admirals sent a letter to Congress on Wednesday urging lawmakers to reject the Iran nuclear agreement, which they say threatens national security.

The letter is the latest in a blizzard of missives petitioning Congress either to support or oppose the agreement with Iran, which would lift sanctions if Iran pared back its nuclear program. Letters have come from ad hoc groupings of rabbis, nuclear scientists, arms-control and nonproliferation experts — and now, retired senior military officers, many of whom have worked in the White House during various administrations dating to the 1980s.

The letter, addressed to Republican and Democratic leaders in the Senate and the House, is a response to one sent last week by three dozen retired senior military officers who support the nuclear deal.

“The agreement will enable Iran to become far more dangerous, render the Mideast still more unstable and introduce new threats to American interests as well as our allies,” the letter states.

The signatories include retired generals and flag officers from every branch of service, including a handful who were involved in some public controversies during their careers.

One is retired Lt. Gen. William G. “Jerry” Boykin, who was deputy undersecretary of defense for intelligence under President George W. Bush and is now executive vice president of the Family Research Council. He had ahistory of making controversial speeches, including one in which he characterized U.S. military operations against Islamist extremist organizations as a Christian fight against Satan.

It also was signed by retired Vice Adm. John Poindexter and retired Maj. Gen.Richard Secord, who were involved in the Iran-contra affair in the Reagan administration, in which arms were sold to Iran to fund the contras in Nicaragua.

Many of the signatories served in the White House, under Democratic administrations as well as Republican. The only thing they appear to have in common is that they consider the Iran nuclear deal a threat to U.S. interests in the region and its own national security.

Leon A. “Bud” Edney, a retired admiral who served as vice chief of naval operations, initiated the letter after he read the letter by other retired officers in support of the agreement.

“I looked at the letter they published, and thought it was very weak,” Edney said. “I just don’t agree with it.” He then got the alternative viewpoint rolling through e-mails sent to some of his Navy and Marine friends. They in turn passed it on.

The competing opinions espoused by people within each group reflect the intense lobbying campaign underway even as Congress is in recess. Lawmakers must vote by Sept. 17 whether to “disapprove” the deal. The Republican majority is unanimously opposed to the agreement, so the Obama administration is focusing on ensuring that enough Democrats support it to sustain a presidential veto. They are close to succeeding. So far, 29 senators have announced their support, only five votes short of the 34 needed to block a veto override.

Retired Air Force Lt. Gen. Thomas McInerney, who was vice commander of U.S. Air Forces in Europe, said he considers the agreement the most dangerous nuclear accord in U.S. history.

“What I don’t like about this is, the number one leading radical Islamic group in the world is the Iranians,” he said. “They are purveyors of radical Islam throughout the region and throughout the world. And we are going to enable them to get nuclear weapons. Why would we do that?”

McInerney said he thinks that most retired general officers do not support the agreement, but he said some did not sign the letter because they feared negative career repercussions.

“I don’t think the retired general officers necessarily speak with one voice,” he said. “We’ve all gone our own way when we retired.”

The opinions expressed in the letter were popular enough that people rushed to sign on, even in the hours before it was sent to Congress. The number of signatories almost doubled between Tuesday afternoon and Wednesday morning, copies of the letter showed.

But it’s unclear whether the letter, or any of those written by people on either side of the issue, will have any effect on Congress. Edney suspects it won’t.

“I don’t think this letter will sway anything,” he said. “It’s just the opinion of people who have served their country. It’s an alternative view to what I consider a very weak letter put out by the administration implying generals and admirals support this agreement. But I don’t think it will have any impact.”