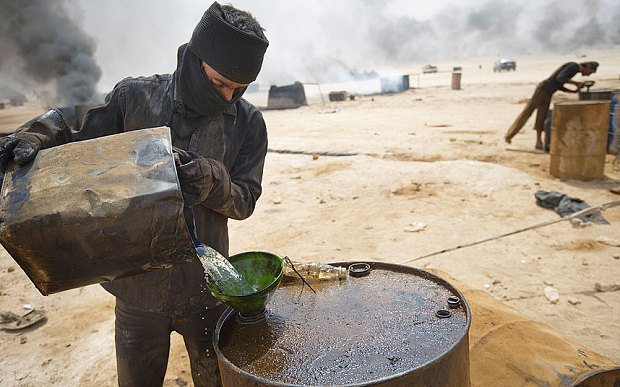 A Syrian businessman responsible for orchestrating millions of dollars worth of secret oil and gas trades between the Assad government and its supposed sworn enemy, the Islamic State of Iraq and the Levant, or Isis, is among 13 individuals and organisations hit with sweeping new economic sanctions by the EU.

George Haswani, a Syrian-Greek businessman with “direct access” to Syrian president Bashar al-Assad, is responsible for broking contracts between Isis and the Syrian regime, according to a diplomat familiar with the new EU sanctions.

Mr Haswani’s company, HESCO — one of Syria’s largest engineering firms — also operates a natural gas production facility in Tabqa that is jointly run by Isis and the Syrian regime, the diplomat added.

The sanctions against Mr Haswani are one of the first official acknowledgments from western governments that Isis and Damascus are working closely together in key areas in a clandestine relationship that sustains the jihadis with significant income.

The EU announced the new economic penalties against individuals and organisations connected with the Syrian government on Friday, but declined to provide information on who or what those sanctioned were.

The Syrian civil war is now approaching its fourth anniversary. An estimated 200,000 civilians have been killed in the conflict to date, with no sign of the violence abating.

Though western governments and regional allies have united in an alliance to destroy Isis and roll back its presence in Iraq, there is still no coherent strategy over how to tackle the group in its heartlands in Syria, or how that would fit with the goal of ousting Mr Assad.

Other individuals on the EU’s new sanctions list alongside Mr Haswani include Brigadier General Ghassan Abbas, who the EU believes was responsible for organising the Ghouta chemical weapon attack in which hundreds of civilians were gassed with toxic nerve agents by the regime in 2013.

Among the Syrian companies sanctioned are DK Group, a series of large steel-smelting and production organisations the EU says are linked to war profiteering and looting, and two front companies used in the production of chemical weapons.

DK Group, which is already the target of US sanctions, is used by the Syrian regime to access foreign currency, the EU believes.

The company flies undisclosed shipments of sterling and euros it has obtained in Moscow into Syria to prop up the Syrian Central Bank on flights it routes through third countries.

Hamsho trading, run by Emad Hamsho — also a sanctioned individual — meanwhile pays militias to strip metals out of villages and towns following regime bombing-raids. The metal is then sold on to Syria Steel, run by Samer Hamsho, which melts it down to produce new armaments for the Assad regime, and also parts for al-Burouj Trading, another company owned by Samer Hamsho.

“The UK has worked tirelessly with other member states to secure 13 new EU sanctions listings on Syria. We are targeting developers, proliferators and users of chemical weapons, along with businessmen and companies supporting the brutal shabiha militias,” said British foreign secretary Philip Hammond.

“We have also agreed to target individuals supplying oil to the regime, including George Haswani, a middleman buying oil from ISIL [Isis] on behalf of the regime. This listing gives yet another indication that Assad’s ‘war’ on ISIL is a sham and that he supports them financially.”

The sanctions mean individuals and companies targeted will be shut out of EU markets and will not have access to credit or insurance. Travel within Europe will also be prevented and any assets held in Europe will be frozen.

Kofi’s Cloak of Terror
What is Wrong with Iraq and PM al-Maliki?
Assad Continues to Commit Crimes Against Humanity
Things That Matter 382