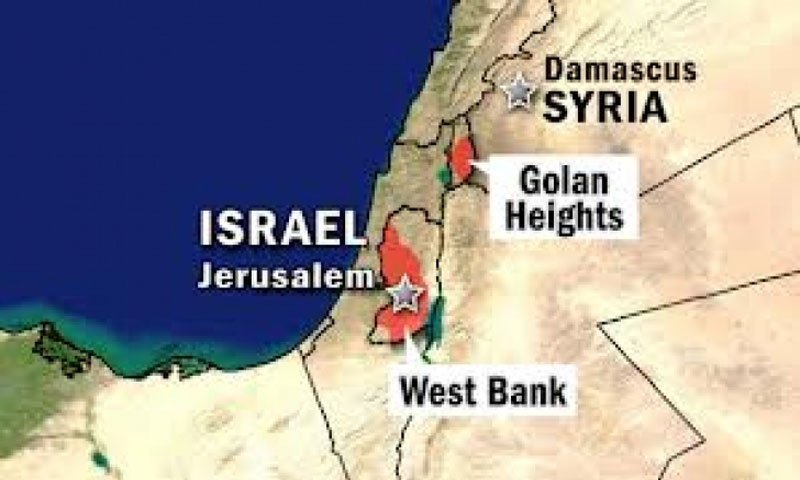 March 7, 2015 7:52 pm 0
While we were dreaming of ISIS
Wisdom in the Land of Israel
Syria’s Love Revolution

As Iran nuclear talks near a deadline, Shiite forces are on the move near the Golan Heights, potentially pitting Iranian forces against those of Israel

BEIRUT, LEBANON — The Golan Heights, one of Israel’s quietest frontiers, is showing signs of becoming an active front that could soon bring the forces of arch-enemies Iran and Israel into direct contact for the first time.

For nearly a month, Lebanon’s militant Hezbollah organization and other Shiite forces under Iranian command have been inching their way across a belt of southern Syria in a bid to drive out rebel forces fighting the regime of Syrian President Bashar al-Assad, an important Iranian ally.

If the offensive is successful, it could leave Iranian forces and their Shiite allies in control of the Syrian side of the Golan. And from that vantage point, Tehran could gain an additional means of deterrence against Israel in the remaining months before the June 30 deadline for negotiations over Iran’s nuclear program.

“The Iranians through Hezbollah really do wish to complete this encirclement from the north [of Israel] now that they have access to the Golan.… I think that is a key strategic move for them,” says Phillip Smyth, a researcher at the University of Maryland and author of the Hizballah Cavalcade blog, which focuses on Shiite militarism in the Middle East.

Israel is eyeing with increasing concern the Iranian moves on the Golan, which was occupied by the Jewish state in the 1967 Arab-Israeli war. The offensive leaves Israel in a bind and creates the possibility that if it miscalculates in its response, it could ignite a region-wide war.

Israeli Prime Minister Benjamin Netanyahu accused Iran last month of seeking to open a “third front” against Israel in addition to those of south Lebanon – home to Hezbollah – and Gaza – dominated by Hamas, which fought a two-month war against Israel last summer. And in his address this week to a joint session of Congress in which he warned against a developing nuclear deal, Mr. Netanyahu said Iran was an expansionist power that was “gobbling up” nations in the Middle East.

On Jan. 18, two Israeli drones fired missiles into a convoy of vehicles near the deserted city of Quneitra on the Golan, killing six members of Hezbollah, including two senior commanders, and an Iranian general. Hezbollah exacted revenge 10 days later by firing anti-tank missiles at an Israeli army convoy traveling near Lebanon’s southern border, killing two soldiers and wounding seven.

Israel has not claimed responsibility for the Quneitra drone attack, but it was interpreted as an unusually forceful warning to Iran and Hezbollah to stay away from the Golan.

However, far from being deterred, the Iran-led offensive in the eastern Golan began less than two weeks later. Indeed, the operation was named in memory of the “Martyrs of Quneitra,” a reference to the dead Hezbollah fighters and Iranian general.

“We are taking the area square by square until we reach the border with Israel,” says Abu Ali, a veteran Hezbollah fighter who has served multiple tours in Syria. He confirmed that Iran was leading the offensive and that Iranian troops were on the ground. “Not just officers but soldiers as well,” Abu Ali says. “Iran will be so close to the Israelis that it will no longer need long-range missiles to hit them.”

Several thousand Shiite fighters from Hezbollah, Iraq, Iran, Pakistan, and Afghanistan are reported to be participating in the offensive in southern Syria alongside the loyalist National Defense Force militia and regular Syrian troops. The attacking force has been hampered by bad weather and stubborn resistance from the rebel groups, which include moderate Free Syrian Army elements and Al Qaeda’s affiliate in Syria, Jabhat al-Nusra.

Several villages and key strategic hilltops nevertheless fell to the Iran-led force in late February. If the campaign is successful, it would reverse rebel territorial gains in southern Syria achieved last August to October and deal a blow to purported plans of a spring advance on the southern flank of Damascus, some 40 miles to the north. A regime victory would also sever the supply lines from Jordan to the increasingly beleaguered rebel holdouts east of the capital.

But perhaps the key strategic prize for Iran would be a foothold on the Golan just as the grinding negotiations over its nuclear program reach a climax. A framework agreement between Iran and the P5+1 (United States, United Kingdom, Russia, France, China and Germany) is scheduled to be in place by March 31 with a final deal concluded by June 30.

If a deal is reached in which Iran has to abandon or defer the possibility of acquiring nuclear weapons, its strategic deterrence against Israel would be enhanced through a military presence on the Golan. The same holds true if the negotiations end in failure and the possibility of an Israeli attack on Iran’s nuclear facilities begins to mount.

As Syria’s war has raged, Israel has reached a modus vivendi with some moderate rebel factions along the southern half of the Golan, providing humanitarian assistance in exchange for cooperation in keeping militants like Hezbollah or Jabhat al-Nusra away from the security fence. But the potential defeat of rebel forces in the Golan poses a stark dilemma for Israel. If it does nothing, Iran and Hezbollah could build a new frontline in the Golan from which to menace Israel.

Abu Ali said that tunnel and bunker construction in the Golan had been underway for a year, replicating facilities Hezbollah built in southern Lebanon in the years before the 2006 war with Israel. He added that the Iranian general killed near Quneitra in January was conducting an inspection tour of the new facilities.

Yet if Israel intervenes militarily in Syria to prevent Iran gaining a foothold, it could cause the spark that leads to a regional war.

“On the one hand, we should avoid getting entangled in a war we’re not part of. But on the other hand, if Iran succeeds in its plan to nationalize the Golan and gain control of the Damascus basin, Israel will wake up to a new regional reality … a direct and broad Iranian front which Israel has yet to experience,” wrote Israel Ziv, a reservist major general in the Israeli army, in Friday’s edition of the Yedioth Ahronoth newspaper.

Yaacov Amidror, a former Israeli national security adviser in Netanyahu’s government, opted for a wait-and-see stance toward developments in the Golan.

“For us, a threat from the Golan Heights is not something new,” he says. “Instead of having the Syrian army, maybe we have to face Hezbollah. I’m not sure it’s much more problematic.”

The big difference, however, is that between the implementation of the 1974 ceasefire agreement that ended the Arab-Israeli war of the previous year, and the outbreak of Syria’s civil war in 2011, the Golan enjoyed nearly four decades of calm.

Yet since December 2013, there have been several small-scale roadside bomb and rocket attacks against Israeli troops in the northern Golan – a foretaste of what Israel might expect in the future if Iran and its allies prevail in southern Syria. The attacks, all of which went unclaimed, followed Israel’s suspected assassination of a top Hezbollah commander in Beirut in December 2013 and an Israeli air strike against a Hezbollah facility in eastern Lebanon in February 2014.

The transformation of the Golan from a calm backwater into the latest battleground between Iran and Israel will add a further destabilizing dynamic in Syria’s civil war – one that is beginning to catch the attention of the international community.

“It’s a very combustible mix and ripe for miscalculation,” says a Western diplomat in Beirut. “It could be very dangerous.”