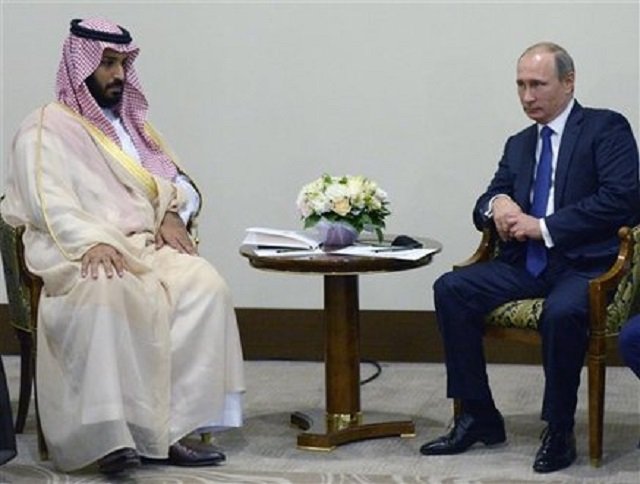 Moscow, Not Washington, Is the New Pilgrim City

October 11, 2015 7:12 pm 0
The Deafening Sound of Multilateralism
One Should Learn from Samar Yazbek
Assad Finger on the Panic Button

It seems that Moscow, not Washington, is the new pilgrim city for Arab rulers.

Russian President Vladimir Putin met with Saudi Arabia’s Defense Minister Prince Mohammed bin Salman on Sunday about the possibility of a political solution in Syria, where Moscow has been conducting airstrikes since late September.

Thanks to the deliberate policies of Barack Obama to yield the Middle East to our enemies, Moscow, not Washington, is the new pilgrim city. We hope all those American diplomats who backed Barack Obama on Syria see how inconsequential they have become on the world stage.

The two huddled in the southern Russian city of Sochi and were joined by Foreign Minister Sergei Lavrov and Energy Minister Alexander Novak.

“We have closely cooperated with Saudi Arabia for years on the crisis in Syria,” Lavrov told journalists, according to remarks broadcast on television.

“The two parties confirmed that Saudi Arabia and Russia have similar objectives when it comes to Syria. Above all, it is to not let a terrorist caliphate take over the country.”

“After today’s talks, we understand better how to move toward a political solution,” Lavrov said.

Mohammed bin Salman said that Riyadh was worried about Russia’s military intervention in Syria, and the country’s possible alliance with Iran.

He added that Saudi Arabia was in favor of a political solution in Syria, but one which includes the departure of the psychopath Baschar al-Assad, a staunch ally of Moscow.

Lavrov, deploying another ruse, also said that Moscow was ready for closer cooperation with Riyadh to make clear that the country was in fact targeting Islamic State, al-Nusra and other terrorist strongholds in Syria.

Just another way of saying Moscow, not Washington, is the new pilgrim city.

Using modern jets and older Soviet aircraft, Russia has bombed command posts and training camps of what it says are radical “terrorists”, backing a ground offensive by the forces of Assad.

Moscow has flexed its muscles with the bombing campaign across the war-torn country that has put a U.S.-led coalition in the shade and angered Washington and its allies.

Putin said Sunday that the Russian operation’s objective was to “stabilize the legitimate authorities and create conditions for finding a political compromise.”

It is important to note that the Soviet Union has invested in the Assad family since 1957. Anyone who believes Putin is about to abandon a great investment that does not hesitate to deploy extreme violence is wrong.

Moscow, Not Washington, Is the New Pilgrim City