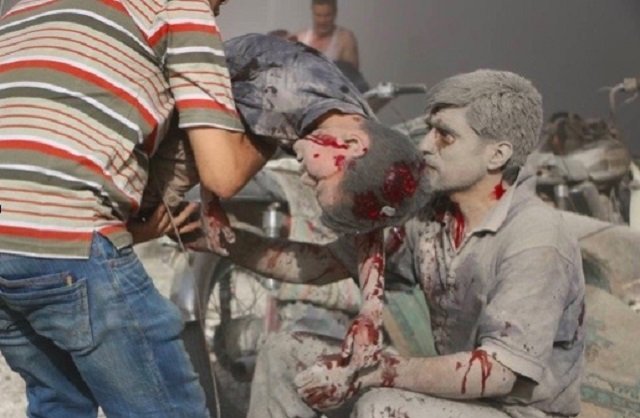 Saudi Arabia is Adamant About Confronting Iran in Syria

October 12, 2015 11:28 am 0
Beware of the Parallels
An Alliance of Opposites Made in Hell
House Panel Accuses Assad, Russia, Iran of War Crimes in Syria

Moscow’s military intervention in Syria will have “dangerous consequences”, escalating sectarian war there and inspiring militants from around the world to join in, senior Saudi Arabian officials told Russia’s leaders on Sunday, a Saudi source said. It seems that Saudi Arabia is adamant about confronting Iran in Syria.

The message, twinned with a pledge of support for moderate foes of Syria’s psychopath Baschar al-Assad, Russia’s ally, signals Saudi suspicions about Moscow’s motives in entering a 4-1/2 year war in which some 300,000 people have been killed and some 11 million, or half the population, driven from their homes.

“The Saudis will continue strengthening and supporting the moderate opposition in Syria,” he added.

The bloodshed in Syria, part of a broader struggle for regional supremacy between Sunni Muslim Saudi Arabia and Shi’ite Iran, has enflamed sectarian divisions across the Middle East and drawn religiously motivated foreign fighters to both sides.

Moscow’s intervention has infuriated the kingdom and other foes of Assad who say the Russian air strikes have been hitting rebel groups opposed to the Syrian leader and not the Islamic State fighters Moscow says it is targeting.

Gulf Arab states suspect the Kremlin’s main motive is saving Assad and that counter-terrorism serves as a convenient excuse.

Saudi Arabia, along with Turkey and Qatar, is a leading supporter of the rebels fighting Assad, who is backed by Iran as well as by Russia. But Riyadh is also worried about the rise of jihadist groups such as Islamic State among the opposition.

“The recent escalation will contribute in attracting extremists and jihadists to the war in Syria,” the Saudi source said, adding that the Kremlin’s actions would also alienate ordinary Sunni Muslims around the world.

The Saudis urged Russia to help fight terrorism in Syria by joining the existing coalition comprising more than 20 nations that is battling Islamic State militants, the source said.

He also reiterated that Assad must quit as part of a process agreed at a Syrian conference held in Geneva in June 2012 that set out a path to peace and political transition. Saudi Arabia is adamant about confronting Iran in Syria.

A core element of that plan calls for a future Syrian government to be formed by “mutual consent” of the authorities and the opposition, a stance Washington has said means Assad cannot stay in power.

In remarks to journalists on Sunday about Russia’s strikes, Jubeir said he had expressed “our concerns that these operations could be regarded as an alliance between Iran and Russia”.

Saudi Arabia is Adamant About Confronting Iran in Syria

Hariri’s Trip to Syria is Ill-Advised
The Iran Deal is a Death Sentence for Syria’s Women and Children
Will Bahrain Fall to Iran After Lebanon?
Iranian Terror 594 Putin Terror 436