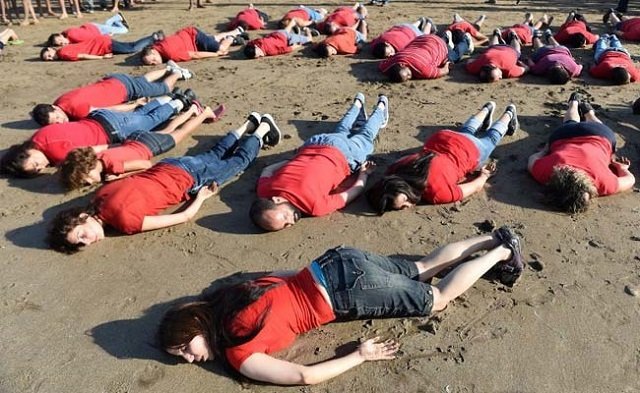 As the world watches Syrian refugees break the geographic seams imposed upon them by a ravaging war to attain a higher and safer grounds in Europe, fear of Islam is rising. While adherents of Islam choose one of several baskets to express their devoutness, fear of Islam is a one-dimensional element that jams all Muslims into one basket.

Fear of Islam considers the religion and its history to base their fears upon, not the people who practice that religion and who over a millennium have come to practice their faith not based on perception and the historical perspective of Muslim scholars but on their own lifelong limitations and expectations.

Fear of Islam, on the other hand, assumes all Muslims will practice the Islam dictated to them by bearded men of extreme views. Even Muslims have come to accept this notion because it was safe to assume the worst and expect less. It was safe to combat terror and extremism by assuming the worst in all Muslims as long as your assumptions were based on ideas and concepts, not on actions.

However, when morality is at stake, humanity can no longer throw Islam in one basket. When waves of Syrian refugees whose death is certain parade in front of our eyes with their miseries, morality dictates that we become a bit more sensitive to their plight by shedding the fear of Islam based on selective thinking, concepts, theories, and generalized historical perspective. When morality is at stake, we must address our fear of Islam with a higher level of intelligence and a higher degree of separation.

Massive Muslim populations in Europe could become problematic if their general behavior and cultural adaptation induce resentment towards their hosts. Muslims who pray to Allah between a Mosque and a home and who wish no ills upon others do not deserve to be feared nor to be subjected to our one-dimensional bias, especially when our morality is being tested. Warnings about the ills of Islam during one of the greatest human migratory tragedies in our times is an immoral alarm if the ills are based on the general concept of Islam and its practices that may or may not be what these Muslim refugees believe in or not.

Take France for example, there are over five million Muslims that come from Islamist countries like Algeria many of whom own businesses and practice a life that would guarantee them the eternal fires of hell. The same is true in northern European countries like the Netherlands, Sweden, and Denmark. Of course, there are the very few extremists who have planted bombs, killed the innocent for being Christians or Jewish, and showed the world the ugly side of Islam. However, during the human tragedy of Syrians migrating to Europe to escape terror, we must think more selectively. If the Syrian refugees wanted to terrorize anyone, they would have stayed behind to fight the Assad regime that terrorized them incessantly.

People do not realize that the Syrian civil war has created two security filters against terrorists reaching Europe, One filter expects those who want to become terrorists and extremists already have a reason to stay in Syria. Two, most of those reaching Europe are families with children. They escaped terror, they are not following it.

If it is about numbers and influence that could change Europe’s civilization and cultural stake with time, we must trust that Europe, the target of our scorn often, is able to alter the societal expectations of Muslims who misbehave because of religious reasons. Europeans are electing far-right political parties who will keep vigilance over their stake. They already have their own coalition in the EU Parliament. Already, the hate manifested by the general populations of Europe against Muslims is a safeguard against its Islamization. Yet, most showed their moral compass after watching the images of Aylan Kurdi awash on a Bodrum beach.

If the issue has to do with birth rates and gynecology, developed countries then must address the societal inequalities, the oppression, and the tormenting of people in lesser developed countries. Non-intervention leads to terror and terror leads to migration. Blocking migration because of birth rates while letting mass murderers kill without any accountability because of political cowardice or convenience will create such an imbalance that no country can escape. Either America intervenes to stop the killing and stem the flow of migration, or Europe welcomes the migrants and the killing continues. Having it both ways is worse than immoral.

Every human has a moral compass. It is when we lose sight of that compass and lose sight of our morality that great tragic human events shape the histories we all want to forget. Let us not lose sight of our morality just because of few bad apples or because we jam all Muslims in a lonely basket based on the history of Islam. Syrian refugees may pray to Mohammad, but the absolute majority of Syrian refugees reaching Europe do not wield his sword. Most want a better life for their children. Persecuting the absolute majority for fear of the few is immoral. Period.

Consider this: Some children of Syrian refugee Muslims will contribute greatly to Europe the way Steve Jobs contributed to America. Greatness rises from pain, not comfort.