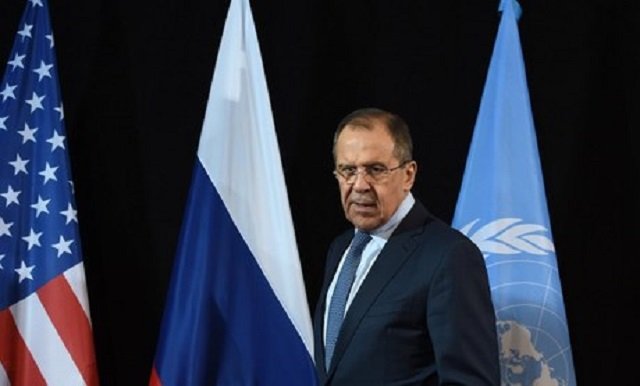 Lavrov Seeks US Intelligence on Saudi Upcoming Operations in Syria

Russian and U.S. armed forces must “cooperate on the ground” in Syria to facilitate a truce and humanitarian access agreed by world powers, Russia’s Foreign Minister Sergei Lavrov said Friday. In other words Barack Obama, Lavrov seeks US intelligence on Saudi upcoming operations in Syria. Saudi troops movements must be kept from Obama’s reach because the man is capable of stabbing his own mother in the back, let alone the Saudis he hates with passion.

Maybe Barack Obama is itching to write another love letter to Khamenei. What better way to start his love fest than “Hope the information we provided on Saudi Arabia in Syria was useful to you”

State news agency RIA Novosti quoted Lavrov as saying “For this to work… cooperation between the militaries on the ground is needed, both on humanitarian issues and issues related to implementing the ceasefire,”

“From the very beginning of our operation in Syria at the invitation of the country’s government, we proposed military contacts between Russia and the U.S.-led coalition,” he said in the German city of Munich where the Syria agreement was struck.

Are not the Saudi storm troopers that will be entering Syria soon not part of the US-led coalition? Clearly, Lavrov seeks US intelligence on Saudi upcoming troops and military plans.

U.S. Secretary of State John Kerry and Lavrov led 17 nations in hammering out the deal aimed at reviving the peace process for the five-year-old conflict. In our honest opinion, John Kerry will be running to Lavrov with the information he needs. No one is dumber than John Kerry.

Moscow strongly backs the regime of the psychopath Baschar al-Assad, while the U.S. and its allies have called publicly for his removal, but acted privately otherwise.

“Now it’s important to implement what has been agreed because sometimes we come to an agreement but our partners do not seek to honor that agreement in practice,” Lavrov said.

“I am hoping that this time things will be different.” In other words, I am hoping Barack Obama would provide us with the intelligence we need on Saudi and Turkish military plans.

The United States has also led a multinational alliance targeting the Islamic State jihadist group in its self-proclaimed caliphate stretching across a swathe of Syria and Iraq.

While Russia also says it is targeting IS, the West has accused it of striking all rebels fighting Assad, including moderates, which is reason enough never to trust the Russian nouvelle aristocratic peasantry represented by Vladimir Putin.

“Unfortunately, the United States avoided cooperation in the military sphere except on issues related to procedures to avoid conflict,” Lavrov said.

“But now — I believe — they realized that to move forward in the Syrian settlement one can no longer avoid contacts between the militaries.” Translation? Give us the Saudi and the Turkish military plans or we might strike your US Special Forces operating around Raqqa.

Lavrov Seeks US Intelligence on Saudi Upcoming Operations in Syria