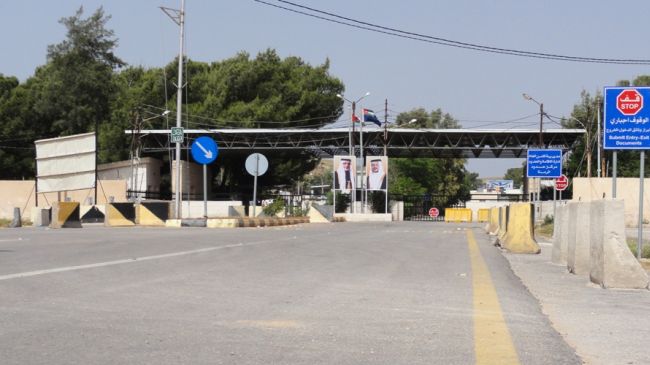 With no end in sight to the violence in Syria, which has already sent a half-million refugees into Jordan, authorities here appealed to the United States on Wednesday for surveillance airplanes and intelligence help to secure a border that is favored by arms smugglers.

In daylong meetings, Gen. Martin E. Dempsey, the chairman of the Joint Chiefs of Staff, King Abdullah II of Jordan and Gen. Mashal al-Zaben, the country’s top military officer, also discussed the need to increase humanitarian assistance to help Jordan cope with a refugee population that is straining water and food supplies, as well as schools and hospitals.

About 550,000 Syrians are officially registered as refugees in Jordan, with about 130,000 congregating in the Zaatari camp, making it the fourth-largest city in Jordan. Most of the refugees are women and children.

Although debate in Washington, especially in Congress, has focused on the risks and benefits of ordering American military intervention or supplying advanced weapons to opposition militias in Syria, General Dempsey said the Jordanians did not raise the issue.

“We did not talk about direct military intervention,” he said. “That actually never came up. What did come up was discussions about what we could do to help them build their capability and capacities, whether it was border surveillance and I.S.R.,” which stands for intelligence, surveillance and reconnaissance.

If Jordan were offered surveillance systems, General Dempsey said, they would be piloted airplanes, not remotely piloted drones.

Other assistance could help Jordan in combining intelligence gathered by like-minded nations across the region to better understand the threat from the violence in Syria.

Although no decisions about any aid have been made, the general said, the United States’ close partnership with Jordan probably means that more help will be forthcoming, which could include increased training for Jordanian Special Operations forces to improve their counterterrorism skills and their preparation to defend against the use of chemical weapons. There is a fear that Syria’s arsenal of those weapons may spread in the chaos of civil war.

The Pentagon has deployed air-defense missile batteries to Jordan, along with F-16’s to train with the Jordanian air force in patrolling its border and air space.

A few hundred American military planners, including communications experts and logisticians, are also in the country.

Senior Jordanian officials have expressed grave, even existential, concerns that the refugee crisis could tax the country’s infrastructure so badly — especially its desert aquifer — that civil unrest could result.

“For Jordan, it is very clearly the refugee issue,” General Dempsey said, “not only the number but the challenge that it puts on their economy and their critical infrastructure, especially commodities like food and water.”

General Dempsey arrived in Amman after meetings in Israel with the country’s political and military leadership.

The view there, according to senior Israeli military officers, is that while outside military intervention is possible in the Syrian civil war, it is not advisable without understanding the full responsibilities that would come in the aftermath.

General Dempsey said Israel’s security fears growing from the Syrian conflict include the flow of arms that could eventually be turned against Israel, and the prospect of growing Iranian influence in Syria and throughout the region.

After his meetings with Israel’s prime minister, defense minister and military chief of staff, General Dempsey said, he “sensed agreement” that diplomatic initiatives and economic sanctions “were having an effect” on Iran, which is accused of seeking to develop nuclear arms, an accusation it strongly denies.

The Israelis “of course want us to continue to present a credible military threat to support those diplomatic and economic efforts,” General Dempsey said, adding that he told them, “since I was here last year, we have better military options than we did a year ago.”

He declined to provide details.