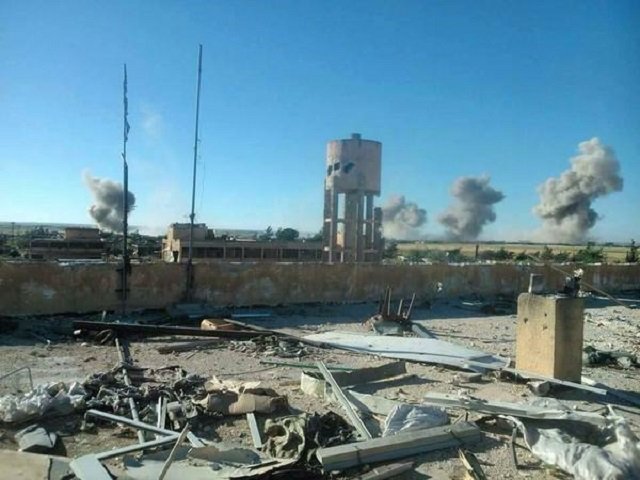 An ISIS suicide car bomb detonated in the Kweires Military Air base outside Aleppo killing General Abdullah al-Fadeel and a number of air pilots in the Assad regime carrying out barrel bombs missions against Aleppo civilians. Kweires Air Base has witnessed heavy fighting over the last few weeks as Syrian rebels attempt to over run its barrel bombs operations.

Apparently, the ISIS suicide car used for this operation belonged to the regime but was booby-trapped by ISIS after its driver flipped sides. This inside job caused maximum casualties among the high echelons of the Syrian army defending the air base. It is unclear why the driver flipped sides, but one can estimate that killing civilians is not sitting well with many pro-Assad soldiers.

The social media began eulogizing the General almost immediately after the attack.

Other than General al-Fadeel, those who died in the same ISIS suicide car attack included Lieutenant air pilot Hussein Mohamed Salameh who hails from the village of Hialin in the Masyaf District in the Hama Province, and a Shabeeha Lieutenant, also called the National Defense Forces (NDF), Mohammed Faisal Abbas who hails from the town of Beit Yashout in the mountains of Latakia.

Others who died included Zakaria Mohamed Zidan, also an NDF soldier, Lieutenant Hussain Munir Samia from the village of Falasko in the Latakia Mountains and Mahmoud Abu Shami, and Ahmed Abbas, and Mohammed Hilal.

The Kweires Military Air Base, located north of Aleppo city, has been under siege by ISIS for over two years. It is estimated that some 800 pro-Assad officers and soldiers remain captive inside the air base and each week ISIS attacks cause irreparable damage to lives and materials. Tens of Assad soldiers succumb every week to ISIS deadly suicide attacks.

Any attempts by the Assad regime to break the ISIS blockade over the Kweires Military Air Base have failed in their objectives.

Obama Nixed CIA Plan That Could Have Stopped ISIS
Pope delivered message the world wanted to hear
Saudi FM says to get rid of ISIS, Assad must go
Syria 450