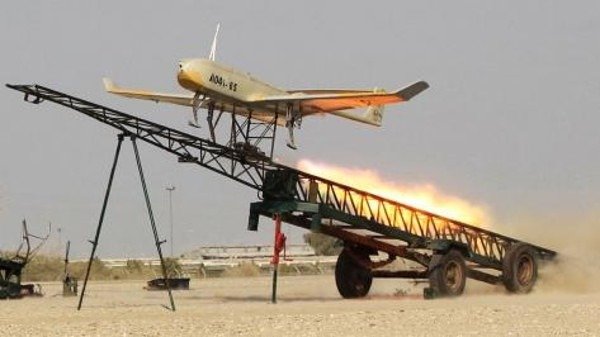 The story “Iran Tests Suicide Drone in Military Drill” below, first published by al-Arabiya, attributes to Iran the design of a new kind of suicide drone aimed at exploding the moment it sinks into its target.

When does one say enough is enough? The savages ruling the Middle East are out of their minds. What is next? A beardless flying IRGC suicide bomber?

Enough is enough of Iran, Syria, Hezbollah, ISIL, al-Qaeda, Hamas, and anyone else who thinks they live in a jungle.

(AP) – Iran’s army said Saturday it has deployed a suicide drone for the first time in massive ongoing military drills near the strategic Strait of Hormuz at the entrance to the Persian Gulf.

Gen. Ahmad Reza Pourdastan, the army’s chief commander of ground forces, described the unmanned aircraft as a “mobile bomb,” according to state media, which said the aerial device is designed to strike air, ground and naval targets.

He did not provide the name of the drone. The conservative Kayhan daily referred to it as the Yasir, while an online news website called it the Raad. Officials could not be reached for comment.

The Yasir drone, first unveiled last year, can fly for up to 10 hours and carry out 360-degree imaging, officials said at the time. Western military analysts say the Yasir is a modified version of the American ScanEagle drone. Iran said in December 2012 that it had seized at least three Boeing-designed ScanEagle drones after they allegedly violated its airspace over the Persian Gulf.

Iran is believed to have produced its own remotely piloted suicide drone, the Raad-85, which is designed to crash into targets and set off its warhead.

The six-day military exercise is being carried out over 850,000 square kilometers (527,000 square miles) near the Strait of Hormuz, a narrow waterway through which one-fifth of the world’s oil supply passes.

Iran frequently touts advances in its homegrown aerospace industries. It says its most advanced drone, the Shahed-129, can reach much of the Middle East, including Israel. The drone is said to have a range of 1,700 kilometers (1,050 miles) and a 24-hour flight capability, and can carry eight bombs or missiles capable of hitting both stationary and moving targets.

Of Camel Races Rifts and Culture
The Gates of Hell
Obama Asleep, Iran Builds for an American Reckoning
Radicalism 567