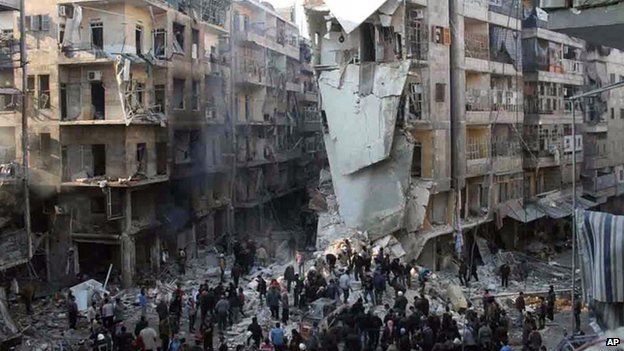 Comparatively speaking, the Assad regime, for now, is safe. On one side, the US-built coalition is hammering ISIL strongholds, and on the other, the moderate Syrian opposition, the real danger to Assad, is all but defeated through either blood spilling or attrition to extremism. What remains in Syria are mostly terrorists and killers on both sides, small pockets of moderates, in addition to the pro-western Kurdish regions.

Architect Obama must be proud of his masterpiece and for helping Assad’s “If not me, it’s the extremists” come true in vivid colors.

So why then Assad is still attacking civilians with barrel bombs knowing well this will drive more Muslim Arabs and foreign fighters to join ISIL. Killing civilians has no combat value, only a psychological one whose cost benefit analysis produces more costs than benefits ever since ISIL came to be.

The last bombing is 24 hours old. A resident of Qabasseen, outside Aleppo, named Yousef al-Saadi, told Reuters via Skype that the barrel bombs targeted an open market only civilians frequented:

“People were going about scraping a living and there were no armed groups in the market, only poor people. Why is Assad killing us? May God bring vengeance on him”

There are two explanations for this tactic by Assad bolstering ISIL. One is to drive more fighters to join the terror organization in the hope the US-led coalition would commit more than random air strikes. Assad wants US boots on the ground to help his regime win a war, according to Israeli intelligence, he has not been able to conclude, nor will he in the foreseeable time.

The other reason has to do with the oil war Saudi Arabia has started against Iran and Russia, two countries indispensable to Assad for his survival. If Assad can compel Obama to dispatch US boots on the ground in northern Syria, Assad would shun Saudi Arabia’s oil war. Its result would be an abjuration for the necessary war funding from Iran. Assad believes his kill-civilians strategy is a stare down against Saudi Arabia because it feeds ISIL, an archenemy of the Kingdom.

For its part, Saudi Arabia fears the rise of ISIL because its terrorism is no different from Iran. By forming an Islamic State, ISIL, like Iran, is attempting to expand through violence and destruction. The last the al-Saud rulers want is another terrorist organization or country speaking in the name of Islam or Muslims. To both the Syrian and the Iranian regimes, this fear is Saudi Achilles’ Heel the same way Saudi Arabia considers low oil prices to be Iran’s biggest weakness.

Whether anyone at the NSC has come to this conclusion, I very much doubt it. Iran is setting-up a new trap for Obama, and my guess he is going to waltz right into it. Is the US not already stockpiling large weapons in Kuwait in anticipation of cleansing Iraq of ISIL? Why are we then letting Assad help ISIL recruit more Jihadis by targeting civilians?

Memo to President Obama: Your next letter to Khamenei should threaten Assad if he continues to strengthen ISIL’s existential position.

There is no reason why the world community should simply stand by while poor and helpless women and children become victims of ruthless and extremely violent men our president does not seem able to control. There is no reason why the western media does not tie the killing of Syrian civilians to ISIL’s expansion. Not doing so would encourage our enemies to trap us and would make our war against terror so much more difficult.

If Assad needs ISIL to expand, and Iran sees in this strategy US boots on the ground to save Assad, there is no reason why our soldiers should die to save Assad and help Iran.

Obama may be about to sacrifice our armed forces just to get a US-Iran deal instead of striking Assad to write his own deal.

Of Psychpaths and Cowards
Why Would Russia Agree to Investigate Assad’s Use of Chemical Weapons?
War of Aleppo is Turning Against Assad
Radicalism 567