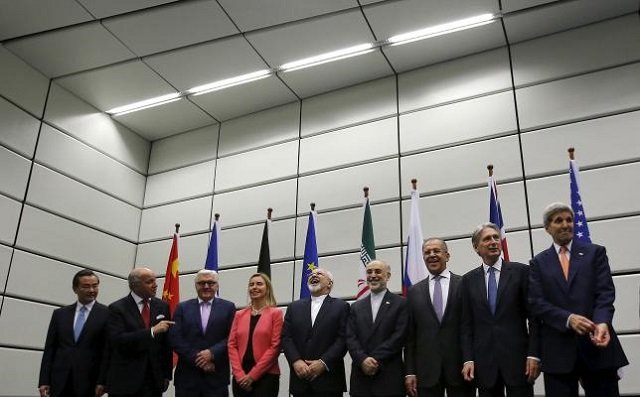 Abbas Araqchi, one of several deputy foreign ministers, told a news conference Iran would do ‘anything’ to help allies in the Middle East, underlining Tehran’s message that despite the deal Iran will not change its anti-Western foreign policy.

In other words, the Iran deal means more terror, not less.

Furthermore, Iran will not accept any extension of sanctions beyond 10 years, an official said on Wednesday, in the latest attempt by its pragmatist government to sell a nuclear deal with world powers to skeptical hardliners.

Ayatollah Ali Khamenei, the highest authority in Iran, told supporters on Saturday that U.S. policies in the region were “180 degrees” opposed to Iran’s, in a Tehran speech punctuated by chants of “Death to America” and “Death to Israel”.

Under the accord, Iran will be subjected to long-term curbs on its nuclear work in return for the lifting of U.S., European Union and U.N. sanctions. The deal was signed by the United States, Britain, China, France, Germany, Russia and the EU.

The accord is a disaster deal U.S. President Barack Obama insisted on signing and a victory for Iran’s Hassan Rouhani.

Araqchi, Iran’s senior nuclear negotiator, told the televised conference that any attempt to re-impose sanctions after they expired in 10 years would breach the deal.

He was referring to a resolution endorsing the deal passed by the U.N. Security Council on Monday.

The resolution allows all U.N. sanctions to be re-imposed if Iran violates the agreement in the next 10 years. If Iran adheres to the terms of the agreement, all the provisions and measures of the U.N. resolution would end in 10 years.

However, the six world powers, known as the P5+1, and the European Union told U.N. Secretary-General Ban Ki-moon earlier this month that after 10 years they planned to seek a five-year extension of the mechanism allowing sanctions to be re-imposed.

Araqchi challenged this move, saying: “Our priority is our national interests, not UN Security Council’s resolutions.”

“The U.N. Security Council’s resolution says clearly that the timeframe of agreement is 10 years, and Iran’s case will be closed in the Security Council after that,” Araqchi said.

“If the U.S. and any other member of P5+1 say they want to adopt a new resolution after 10 years allowing sanctions to be re-imposed, it is the breach of Vienna agreement and has no credibility.”

Iran’s foreign ministry said shortly after the passage of the resolution on Monday that the nuclear deal did not mean Tehran accepted “sanctions and restrictions imposed by the UNSC, the U.S., the E.U. or member countries.”

On Monday, Araqchi told national television: “Whenever it’s needed to send arms to our allies in the region, we will do so. We are not ashamed of it.”

The Iran Deal is a Death Sentence for Syria’s Women and Children
Who is funding terror?
To Be Chalabi, or Not To Be
Iranian Terror 594