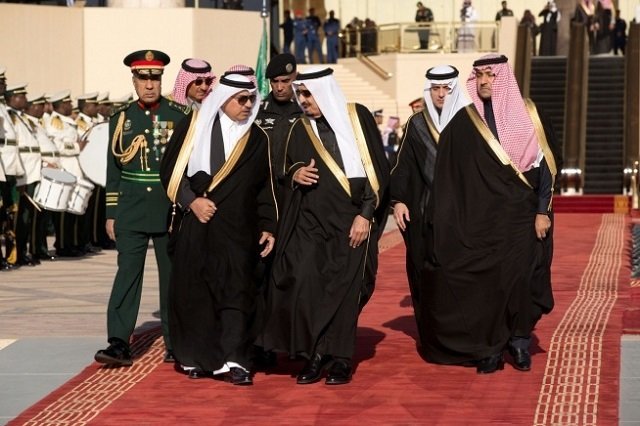 Angry Arab Countries May Not Be So Patient

U.S. Secretary of State John Kerry will seek to reassure Gulf Arab officials at a meeting in Qatar soon that Washington will work with them to “push back” against Iranian influence in the region, he told the pan-Arab newspaper al-Sharq al-Awsat.

The Arabic diplomatic murmurs must have reached too high a pitch for Kerry to talk “push backs”. Iran, with its own threatening rhetoric coming out of Tehran is making it difficult for the administration to justify its deal. The angry Arab countries Obama thought he tamed at Camp David may not be so patient anymore.

Most of the U.S. allies in the energy-rich Gulf publicly welcomed the deal between world powers and Tehran over its disputed nuclear program, but they accuse Tehran of interfering in Arab conflicts and pushing hard for heightened regional influence.

“I will be traveling to Doha in the next couple of weeks to meet with the whole (Gulf Cooperation Council),” Kerry told the paper in an interview published on Wednesday. He was referring to a group of countries comprising Saudi Arabia, the United Arab Emirates, Bahrain, Kuwait, Oman and Qatar.

“I think we can persuade them both that by being more effective in our counter-push as well as through the restraints we have, they will be significantly strengthened going forward.” Kerry may be too optimistic about convincing the angry Arab countries manifesting their displeasure more and more openly.

Iran’s Supreme Leader Ayatollah Ali Khamenei told supporters on Saturday that U.S. policies in the region were “180 degrees” opposed to Iran’s and his country would continue to back its allies in Arab states.

Kerry told Al Arabiya television he found those comments disturbing and troubling. His reassurances will be meaningless if Obama is unwilling to defend against Iranian expansionism using force.

In fact, few of America’s friends in the region back the deal to include angry Arab countries and more than angry Israel.

Israel is implacably opposed, and Arab allies of the United States such as Saudi Arabia, ruled by Sunni Muslims, are extremely suspicious of an arrangement that would benefit their Shi’ite, non-Arab rival Iran, which they accuse of fomenting sectarian conflict in wars in Yemen, Iraq and Syria.

Kerry’s diplomatic outreach follows a summit with Gulf Arab leaders called by President Barack Obama at Camp David in May, which was snubbed by the leaders of Bahrain and Saudi Arabia.

Despite their misgivings, Kerry said, the United States aimed to convince its allies the deal was in their interests.

The angry Arab countries are not convinced they need to hear Kerry talking “push backs” when his own deal created the conditions for “push backs”.

Angry Arab Countries May Not Be So Patient