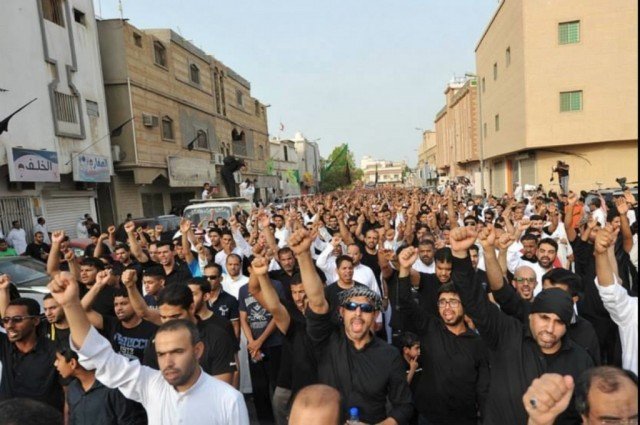 May 25, 2015 11:42 am
Who is not fighting whom in the Middle East?
Islam low tolerance for pain
Please Sign Memo Against the Iran Deal

Tens of thousands of Saudi Shiites gathered Monday for a mass funeral for the victims of a mosque bombing authorities called an attempt by Sunni extremists to sow sectarian strife.

What better way for Iran to avenge Saudi bombing of the Houthis in Yemen but to sow terror inside Saudi Arabia by killing Arab Shiite it cares very little for? Iran beginning to destabilize Saudi Arabia.

If Iran beginning to destabilize Saudi Arabia proves to be accurate, King Salman should call Obama’s bluff about protecting the Kingdom from Iranian terror.

Mourners from the kingdom’s minority crowded the streets in the mainly Shiite Qatif district of Eastern Province to show their respect for the 21 dead, who included two children.

A Shiite imam led the funeral prayer in a marketplace under a cloudless sky, as a breeze carried the fragrance of the herb placed on prayer mats upon which the bodies lay.

The bodies were then carried on litters decked with flowers in a final procession towards the cemetery in Kudeih village, where the attack took place on Friday.

Everybody “is very much anxious to participate… to express their support,” one organizer said ahead of the funeral, asking not to be named.

The suicide bombing, during the main weekly Muslim prayers in Kudeih, was the second mass killing of Shiites in the kingdom since late last year.

In November, gunmen killed seven Shiites in the Eastern Province town of al-Dalwa.

Asked whether he feared a new attack during the funeral, the organizer said: “Nobody can predict anything. We have taken all precautions in coordination with local authorities.”

He added that tens of thousands of people had volunteered to act as crowd marshals for the ceremony.

He said safety concerns had prompted organizers to ask women to stay away from the funeral but that a separate area had been set up for them to offer condolences after the burials.

Iran Sowing Terror Inside Saudi Arabia is part of a plan to destabilize Saudi Arabia Iran may be embarking upon to stop the bleeding in Syria and Yemen.

Saudi Arabia may fall prey to Iranian terror if the Kingdom does not respond by supporting the Ahwazis in Iran to rise against Tehran. The region may be on the verge of total chaos.

Black flags of mourning flew in the streets of Qatif, where police mounted checkpoints while volunteer marshals in bright yellow and orange vests inspected vehicles.

“What happened, the unfortunate event, made us more united,” said Ayman Alawi Abu Rahi, who is from Kudeih.

“We as a Shiite community, we are not afraid of explosions. We condemn the terrorists,” but not Sunnis. “They pray in our mosques,” he said as mourners shouted the name of the Shiite-revered Imam Hussein.

The Islamic State group said it carried out the bombing, the first time the jihadists, who control swathes of neighboring Iraq and Syria, had claimed an attack in the Sunni-dominated kingdom.

The interior ministry confirmed that the bomber, a Saudi national, had links with IS, which considers Shiites to be heretics.

It was the deadliest attack in years in Saudi Arabia, and King Salman vowed on Sunday that anyone with the slightest involvement in the “heinous crime” would be punished.

Most Saudi Arabian Shiites live in the east, where the vast majority of the country’s oil reserves lie but where Shiites have long complained of marginalization.

Saudi Arabia and its Sunni Gulf neighbors joined a U.S.-led air campaign against IS in Syria last year, raising concerns about possible retaliation in the kingdom.

Saudi Arabia is Preparing for a War With Iran
Is Obama paving for a nuclear Iran intentionally?
The alSaud that you don’t know
Radicalism 567