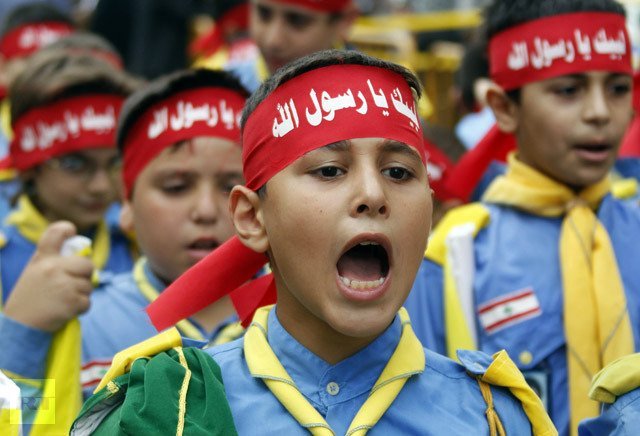 Hezbollah Sending its Children to Die in Syria

May 7, 2015 7:36 am 0
What is Wrong with the Middle East?
Saudi Arabia is right
Do Not Write Your Memoires Before Obama Writes His

Arabic newspaper Al-Arabi al-Jadeed published an article detailing instances where Hezbollah sending its children to die in Syria are as young as 15 years old.

The party of god, headed by a bearded primate, has been losing so many men in Syria, it has now resorted to killing its own children to protect the terror of Assad.

One such child Hezbollah admitted to dying without admitting his age was Mashhur Fahd Shamseddine. According to Al-Arabi newspaper, Mashhur was only 15 years old. He died fighting in the Qalamoun mountains against Nusra Front Islamists.

Hezbollah sending its children to die in Syria is demonstrative of the heavy toll the terror organization has been registering with its fighters dropping like flies against highly motivated rebel forces. These rebels forces are fighting to prevent their families from being slaughtered and their homes from being leveled. The motivation factor cannot be underestimated in guerrilla warfare.

Compare that to a Hezbollah fighter trained and dehumanized to attack Israelis, but instead finds himself battling people that could have been his neighbors. This mental adjustment takes time and more Hezbollah brain washing.

Like Hitler’s youth, Hezbollah has a program to train 10-17 years old to fight one day for its cause. It has named the program Imam al-Mahdi Scouts in reference to the twelfth Imam Shia believe will return one day to save them from their enemies.

After their training in the Imam al-Mahdi Scouts, some children are selected for military training once they reach the age of 18. The fact Mashhur died in Syria at the age of 15 is indicative that Hezbollah is short-circuiting its own system of feeding its military with able men. This signals the heavy toll Hezbollah is suffering in the Syrian civil war.

Hezbollah sending its children to die in Syria does not bode well for the terror organization. Sooner or later, more will die, which will only increase the pressure upon unwilling parents to refuse committing their children to any Hezbollah indoctrination program or protecting a dictator in a foreign land.

Did Hezbollah really believe Syria was going to be a cake walk? That it could waltz with its overestimated fighters and win the war for Assad?

Hezbollah Sending its Children to Die in Syria