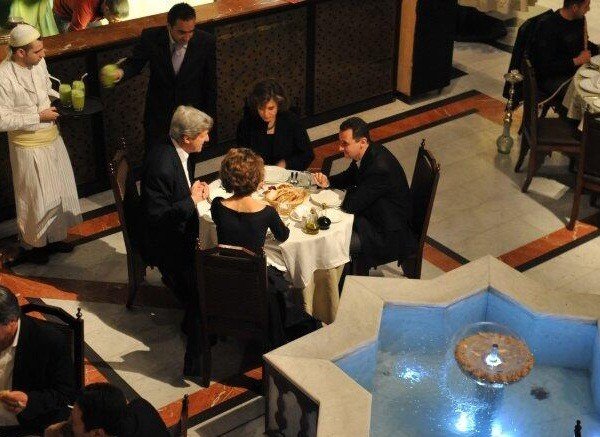 For Heaven’s Sake, We Are the United States of America

September 8, 2015 4:32 pm 0
It is not about the Arab Spring, it’s about Obama’s Policies
At least 16 dead as Syrian school hit in air strike
72 hideous witches for Nasrallah

Here is an old exchange that we extracted from an article by Raf Sanchez of The Telegraph between Senator Marco Rubio and Secretary John Kerry during a hearing on the hill.

The question and answer session provides a glimpse into the inner working of an administration that cannot differentiate between allies and foes.

Mr Kerry repeated President Barack Obama’s pledge not to deploy ground troops under any circumstances but then raised the prospect of Iranian and Syrian intervention.

“I’m not going to get into hypotheticals but you’re presuming that Iran and Syria don’t have any capacity to take on ISIL. I mean, who knows? I don’t know what’s going to happen here,” he said. “If we’re failing and failing miserably who knows what choice they’re might make.”

Rubio: The reason this isn’t a hypothetical is there may come a point where what you’re saying is the only thing that can solve this problem is US combat forces and we are not going to do that and Isil gets to stay.

Kerry: But I think that we are so far away from that “being the only way” and being a hypothetical.

Rubio: Well let me ask you this-

Kerry: No, let me just finish the question. I’m not going to get into hypotheticals but you’re presuming Iran and Syria don’t have any capacity to take on ISIL, I mean who knows. I don’t know what’s going to happen here. Let’s start down this road-

Rubio: Let me ask you about that then. What you’re saying now is there is the potential for the US will be coordinating with Iran?

Kerry: No I never said anything about coordinating. If we are failing and failing miserably who knows what choice they might make.

The US has insisted that it will not coordinate militarily with either Assad or the Iranians.

But this week Iran’s supreme leader, Ayatollah Ali Khamenei, claimed that the US had privately approached Tehran seeking cooperation against Isil. He rejected the approach, saying the US had “corrupt intention and stained hands”.

The US has not denied making the request in private.

First, for Kerry to attribute “failing miserably” to the US shows the extent of how irresponsible our leaders are. They must think we are a third world country. For heaven’s sake, we are the United States of America. We don’t bow to anyone or anything, nor do we fail when we stand firm behind our principles and values.

Further, Secretary Kerry must be a fool to think Iran has forgotten about its war with Iraq in the eighties that cost the lives of one million Iranians. The whole trick about empowering ISIS by the Assad regime is to trap the US, not the other way around. For heaven’s sake, we are the United States of America.

Maybe Kerry has finally realized the trap Iran sprang for the US, and in a desperate move, he is trying to abandon our war against ISIL the way Obama extricated himself from striking Assad for using Sarin gas against women and children. When Kerry testifies, you have no idea who will show up. Dr. Jekyll, or Mr. Hyde.

For the Obama Administration to ask Iran to fight ISIL truly shows how amateurish this administration is. Imagine President Reagan asking General Secretary Chernenko to remove the typewriter bugs the KGB planted in the US Embassy in Moscow, which the US discovered in 1985. This is where the American foreign policy is, inept and incompetent. No wonder Putin invaded the Ukraine.

For heaven’s sake, we are the United States of America.

If the US has approached Iran as Khamenei has confirmed, how can we be sure Kerry did not approach Assad at all to coordinate on one matter or another?

They were and we believe are still the best of friends.

For Heaven’s Sake, We Are the United States of America

Now, I Know How Israelis Feel
How Islamism Grows in Syria
US should stop Assad not ISIS: Saudi prince
Slippery Barack Obama 976