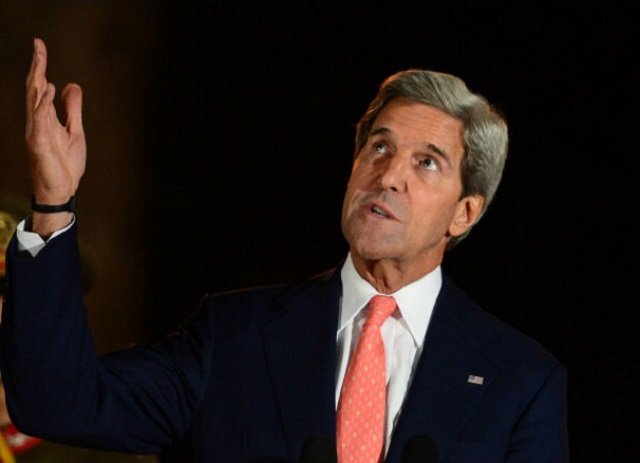 TFS Note: John Kerry has been Assad’s best friend in the Senate and remains committed to that friendship no matter what he says publicly. Kerry will never, ever work to remove Assad from power. He is by far the worst Secretary of State ever. He loves mass murderers, terrorists, and everything in-between.

Secretary of State John Kerry is at odds with several senior State Department officials over whether to press ahead with plans for a high-profile peace conference next month that is designed to put negotiators from Syria’s main opposition groups and the government of Syria’s Assad into the same room for the first time.

Kerry is strongly committed to holding the talks and has spent the past several days prodding key Syrian opposition figures to take part in the negotiations. But according to several senior State Department officials, some of Kerry’s top advisors believe that the conference should be called off because the most important of those opposition leaders are unlikely to come.

“The only person who wants the Geneva conference to happen is the secretary,” a senior U.S. official told The Cable. “Who’s going to show up? Will they actually represent anyone? If not, why take the risk?”

The Geneva conference has been in the planning stages for months, and Western officials have long expressed hopes that it could help pave the way for a negotiated solution to the Syria crisis.

The Obama administration and its top allies believe that the fighting in Syria is largely at a stalemate, with forces loyal to Syrian strongman Bashar al-Assad unable to fully vanquish the country’s insurgents and the rebels looking to unseat Assad unable to conquer Damascus or oust him by force. Peace talks, Kerry argues, offer the only realistic chance of ending a civil war that has already claimed the lives of more than 100,000 Syrians and forced millions of others from their homes.

There’s just one catch: a growing number of key Syrian opposition leaders say they won’t attend the conference unless Assad promises to transfer power to a transitional government and then step aside. Assad has rejected both of those demands, and Kerry’s critics within the State Department believe that there is a good chance that the main opposition groups will either boycott the conference entirely or send a delegation that has little to no influence over the rebels who are actually fighting Assad’s forces. Some of the officials said the conference should be postponed or canceled to avoid an embarrassing public failure for the U.S.

Top State Department officials, including U.S. Ambassador to Syria Robert Ford, have told Kerry that it would be hard to cobble together a broad coalition of Syrians by mid-November, the scheduled start date for the talks, and cautioned that many prominent opposition figures were likely to sit out the negotiations altogether.

“It’s possible we can get a delegation there,” a senior State Department official told The Cable. “It’s not impossible, but it will certainly require some work.”

The divisions within the State Department come at a delicate moment in the long U.S.-led effort to bring Assad and his enemies to the negotiating table. The leadership of the Syrian Opposition Coalition, or SOC, the umbrella group working most closely with the West, will gather in Istanbul on November 1 and 2 to vote on whether to send a delegation to the Geneva talks. The Syrian National Council, the largest bloc in the SOC, has alreadysaid it will boycott the negotiations, and the president of the Syrian Opposition Coalition has set such stringent preconditions for participation in the talks that it appears his group is prepared to sit out the negotiations as well.

The senior State Department official told The Cable that Washington believed there was still a chance of persuading the Syrian National Council and the larger Syrian Opposition Coalition to to participate in the Geneva talks. It would be difficult for the talks to place without the umbrella group.

“Right now the participation of the SOC in Geneva is not assured, but it is still possible,” the official said.

Ford, the U.S. ambassador to Syria, is in Istanbul this week as part of a last-ditch effort to convince the opposition leaders to change their minds and participate in the Geneva talks. Even if he succeeds, however, it’s far from clear that they will be speaking for the rebels fighting on the ground in Syria. Last week, 65 of the rebel militias, including several linked to the Western-backed Free Syrian Army, said they no longer recognized the Syrian National Council and wouldn’t feel bound by any deals it struck.

The disarray among the Syrian opposition leaves Kerry in a bind. The Obama administration has decided not to intervene militarily in Syria or make much of an effort to train or equip the rebels. U.S. backing in the peace talks is about all Washington is willing to provide. The rebel groups have to decide whether that’s enough. Kerry will have to decide if he’s willing to gamble that they will say yes.