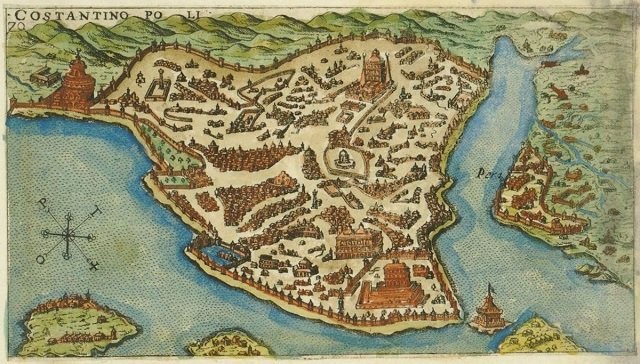 July 5, 2015 1:10 am 0
The Brotherly Cookbook
The Nine Dangers Facing Syria
Give Syrians a Chance, Give Israelis a Break

In today’s modern world, there have been several sectarian conflicts that erupted as a result of the Eastern Orthodox Church asserting itself upon a Muslim population. In two instances, the Muslim population representing the majority.

Whether it is the Russian-Chechnya war, the Serbian massacres of Muslims in old Yugoslavia, or the Assad massacres of Syrian Muslim women and children, in all instances, the Eastern Orthodox Church backed, supported, and even blessed these wars openly.

And as Yugoslavia split apart, today’s Orthodox Church support for the Assad regime is leading Syria towards the same fate, thus permitting the country to become a hub of religious extremism and fanaticism that hardly existed before except in about 5% of the population that supported the Muslim Brotherhood.

It seems, from these historical examples, that everywhere Orthodox Church rules around Muslims chaos and death seem to follow soon thereafter.

The root cause of these conflicts remain the loss of Constantinople in 1453 to Muslim marching armies. The Church, in almost 700 years, has never forgotten Constantinople, its jewel city and center of power.

For example, Croatia, which accounted for 600,000 minority Serbs all of whom were descendants of 15th century escapees from the Turkish rule, wrestled with the Muslim population in old Yugoslavia until they found the opportunity to exact revenge upon Muslim civilians during the Bosnia tragedy.

For this Serbian minority, the loss of the greatest city, still stirs deep emotional animosity and even hate towards Muslims.

If one takes into account these modern conflicts, apparently the Orthodox Church absorbs and channels that animosity in ways that spark sectarian conflicts wherever Islam and Orthodoxy mix. Peace between the two religions seems to be a distant pipe dream as if Constantinople was lost to Muslims last year.

As the Serbians lost during the Bosnian conflict, the Assad regime is headed towards a loss in Syria, which will surely shrink the Orthodox Church influence in the region.

There are documented instances during the Bosnian war when Orthodox priests were observed blessing Serbian militias after they cleansed a region of all Muslims by butchering innocent women and children. There is magnanimity in victory, then there is utter stupidity. How different is this single act from a Muslim Imam blessing terrorists who beheaded an infidel?

Should this be a lesson for the more peaceful Copts of Egypt? Should they begin engaging with the moderate Muslim elements the way the Catholics have successfully done in Lebanon, and avoid at all costs the appearances that the Church supports tyrannical rulers who murder Muslims by the thousands?

In Syria, the Church did not even try to spin its support for Assad and his atrocities. Read “Where Was Patriarch Gregorios Laham When Assad Gassed Civilians“.

The Orthodox Church lost Constantinople and Muslims lost Spain. Neither is an excuse for supporting violence or tyranny.

We, as moderate Muslims, want to see other violent Muslims eradicated with force if necessary. Why the opposite is not true? Why the extreme elements in the Orthodox Church are let loose, which is leading to disastrous results for the Church? What lesson will the Church draw from its support of regimes behind the mass murder of Muslims as they did in Yugoslavia and Syria?

Everywhere Orthodox Church rules and where conflicts erupted, its leadership lacked the vision to protect its flock properly.

Isn’t time for the Church to cleanse itself of its own fanatic elements too? We can all co-exist together without violence, retributions, or acts of revenge based on history. What did the Romans do after losing their empire? Let history rest.

The Vatican also sits on a small parcel of land courtesy Europe’s own governments. Do you see Catholic priests and nuns bless soldiers after they commit war atrocities?

Everywhere Orthodox Church rules around Muslims should be an opportunity to build bridges.

Egypt cannot go the way of Syria or Serbia. Cooler heads must prevail to build relations with Muslim countries, like Saudi Arabia, based on mutual respect and tolerance. You will be amazed how sophisticated the al-Sauds are.

Trust us, you do not want to imagine a civil war breaking out in a majority Muslim country with almost 100 million inhabitants many of whom voted for the Muslim Brotherhood. Syria would look like a picnic.