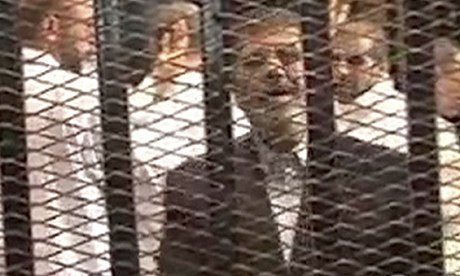 Reuters -?An Egyptian court on Saturday dissolved the Freedom and Justice Party (FJP), the political wing of the banned Muslim Brotherhood, dealing a crippling blow in the campaign to crush Egypt’s oldest Islamist movement.A court banned the Muslim Brotherhood itself in September, but that ruling did not mention its political wing, leaving open the possibility it could be allowed to run in parliamentary elections, due later this year.Saturday’s supreme administrative court ruling excludes the Brotherhood from formal participation in electoral politics, potentially forcing the movement underground, particularly as it has lost the sympathy of large swathes of the public.The court’s ruling called for the FJP to be dissolved and its assets seized by the state. Its decision is final and cannot be appealed, a judicial source said.The Muslim Brotherhood, once Egypt’s oldest, best organized and most successful political movement, has seen hundreds of its members killed and thousands detained since then-army chief Abdel Fattah al-Sisi overthrew elected president and Brotherhood member Mohammad Mursi 13 months ago, following weeks of protest.Mursi, who ruled for a year, and other Brotherhood officials were rounded up in the wake of his ousting and hundreds have been sentenced to death in mass court rulings that have drawn criticism from Western governments and human rights groups.?Sisi, who went on to win a presidential election in May, vowed during his campaign that the Brotherhood would cease to exist under his rule.The Brotherhood maintains it is a peaceful movement but attacks by militants have risen since the army overthrew Mursi.Most of the violence has taken place in the Sinai Peninsula near the border with Israel and the Hamas-run Gaza Strip. The army has responded with air and ground attacks.The FJP was established in June 2011, in the aftermath of the uprising that removed Hosni Mubarak from power after 30 years and inspired hopes for a more pluralistic political system in Egypt.