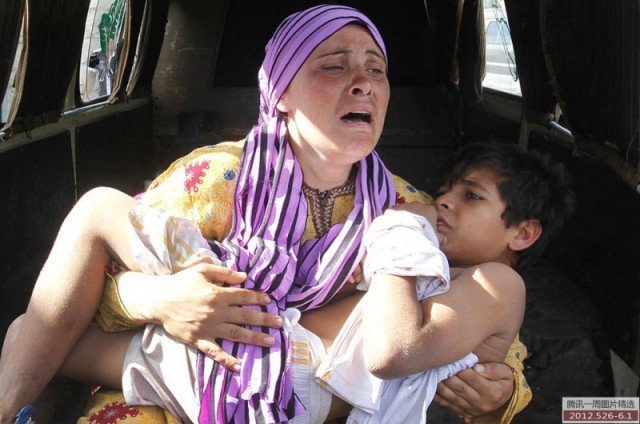 Agonizing fate of mothers in Syria

August 10, 2014 11:32 am 0
Russian Special Forces Officer Killed in Syria
Oil enriched Assad, Oil may be his demise
Assad’s Train Schlepped by a Locomotive of Fetishism

Imagine yourself Terry O’Neill, as President of the National Organization for Women, to be a Syrian woman or mother in the 21st century. This is the agonizing fate of mothers in Syria.

For over 45 years, the Assad regime has sucked the oxygen out of the Syrian economy in favor of his bank account and his cronies and close supporters, so it is hard for your son, husband, or father to find suitable jobs to protect their loved ones. Your family’s daily meal consists of bread, olives, and if you are lucky some cheese with a tomato or two.

Over the last three years, as a woman in Syria, you have experienced real terror delivered through a variety of means.

Your government has besieged the city where you live just as the medieval armies besieged towns. The food supplies depleted rapidly and the constant bombardment has rendered water undrinkable. You begin to starve while your husband, father, or sons are rotting in an Assad jail waiting torture and execution for demonstrating peacefully.

As starvation begins to take its toll on your children, you go out in the streets roaming trash bins to find anything to eat only to be shot by Iranian snipers waiting for you to appear in their high-powered scopes. If you are pregnant, the Iranian and Hezbollah snipers will aim for your uterus just for the fun of it. Should you survive that ordeal that you have to undertake at least once every two days, you sleep at night covering your children with your frail body in the hope you can protect them from the barrel bombs dropping from the starless skies in the middle of the night.

If you survive the snipers and the barrel bombs, then you have to be concerned the next day about the drinking water mixed with raw sewage and finding a new more suitable place to protect your children in the hope Assad and his savage troops do not bomb you. Of course, during all these routine motherly instincts for survival, you still need to be concerned about so many diseases that could take the lives of your children and turn their sufferings into a painful sight for any mother.

Let us suppose you survive the Assad terror. Now comes another period of terror you must face, which Assad, again, unleashed against you in the form of ancient bearded men with stones in their hands eager to stone you to death for any infraction they deem God has not sanctioned.

As a mother, you are caught between the terrible bombs of Assad or the hard rocks of ISIS. What happens to your children when ISIS stones you to death now becomes a matter for either the ISIS social services, known for their blue ribbon assistance, or the Assad regime social services considered the most human in the world. As you die from stoning, the smiling faces of your children flash right before your eyes.

The agonizing fate of mothers in Syria.

For all the women who support President Obama blindly, the women of Syria are your story to read. Think about what they are enduring and about our own humanity when we do not respond to their cries for help.

How does that differ from the cries of those you believe our government wronged when it needed to protect us? How can a woman 7,000 miles away not feel the pain of other women and react to their pain? I can understand men not reacting because of who we are, but I just cannot wrap my head around the silence of First Lady Michelle Obama and Valerie Jarrett in pressuring our President to assist the women and children of Syria.

Many books express the greatness of men and far fewer express the greatness of women in our history. When history present any woman the opportunity to change its course for the good of humankind, as it does today for Michelle Obama and Valerie Jarrett with regard to Syria, they miss that opportunity because they cannot see themselves in that role.

The agonizing fate of mothers in Syria.

Nutrition in school lunches will not even make a line in the annals of history of American women. Only stopping the carnage against women and children tyrannized by an oppressive regime will elevate them to greatness. Championing such cause celebrates humanity in its defeat of evil.

Hooray for all the women who stand against evil when they can. Along the way, they rise to greatness partially because they write the history of weaker men.

Agonizing fate of mothers in Syria