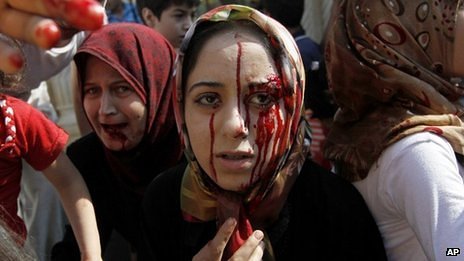 March 4, 2014 2:25 pm 0
If we do not defeat Assad, ISIL may defeat us
Imagine Hitler instead of Churchill
Falafel Chlorine Gas Interview of Barack Obama

Which countries kill civilians indiscriminately without any regard for human life? When we look closely, only rogue nations like Syria, Iran, North Korea, Russia, Cuba and Venezuela do. When Western nations, like the United States, accidentally cause ?collateral damage?, our own system of Government trigger long debates over the practice, and eventually our leaders implement new policies to minimize or eradicate these accidents. In a Democracy, a human life has value, but no so in evil countries.

Rogue and violent nations kill by any means possible. In the case of Iran, stoning or hanging is commonplace. In Syria today, the Assad regime uses WMD, mass starvation, military Jets, missiles, tortures, and barrel bombs filled with nails to drop on civilians. In the case of Hezbollah and Hamas, their preferred weapons of choice are different types of inaccurate missiles striking Israeli schools and hospitals. In fact, the means villainous regimes use to kill civilians are limitless in scope. Anything goes.

During the Obama Administration, the killing of civilians is taking on new meaning because violent countries know fully the US is not about to interfere or threaten retaliation. The worst they can expect is Mr. Obama delivering a statement where the word ?consequences? is as meaningless as a UN vote because Russia and China could veto easily. Considering how Mr. Obama initially responded to Russian invasion of the Crimea and how important the Ukraine is to Europe, the foreign policy imperatives of this White House is to neglect all violence perpetrated by brutal nations in the hope everyone else does too.

When wars erupt, civil or regional, we accept, as normal, that soldiers fight each other. We pay tribute to them with poems, movies, books, and songs. Their death on the battlefield causes a deep pain for a nation losing its children; as people, we have come to accept this fact and we are able to co-exist in a world where soldiers die in wars. When leaders around the world lay wreaths at the tomb of their unknown soldiers to memorialize their sacrifices, it is a sign that nations have come to terms with men fighting in wars.

Civilians, on the other hand, should be a different story, but they are not really.

Many countries around the world have signed Treaties and Conventions whose purpose is to protect civilian lives. The vast majority of these countries abide by their commitments, but nations whose habit is to abuse the human rights of their own people do not sign these Treaties or even if they sign them, they ignore them totally and act above the law. This leaves the civilian population vulnerable to extreme violence and even genocide as witnessed in Syria today. Indeed, the killing of civilians is what separates the civilized from the uncivilized and the UN is ill equipped to handle the tragedies of Governments killing their own women and children violently and deliberately.

There is no justification, for any nation, to claim its interests are menaced unless mass murderers kill civilians intentionally. Such logic is absurd. Yet, this is exactly what Russia is claiming when it vetoes any UN Resolution that attempts to stop the Assad regime from bombing civilian districts in Aleppo and elsewhere. One thug named Vladimir Putin is setting the precedent for many future mass murders to practice their trade without any significant pressure from the international community while the leaders of the free world watch the erosion of their own laws and order.

The world must find a solution to this gripping and inhuman problem. We can no longer afford to watch rogue nations kill their own women and children at will, and feel incapacitated by our own laws and paralyzed by our own fears and the structures we built to protect humanity. The mass killing of civilians must stop. This is the biggest problem of the 21st century and while everyone is debating such grand issues as Global Warming, which may have the potential of killing people in the distant future, the world is neglecting those helpless civilians dying today at the hands of few men of violence who abide by no laws and by no rules.

It would be too much to expect from Mr. Obama to think globally or to initiate a doctrine that will secure future generations of civilians wherever they may be. A doctrine or a process, by which the free world institutes immediate and automatic action, be it economic, political, or military, against mass murders of women and children, has the potential of creating the most recognizable name around the globe for generations to come. Women and children of the world, numbering in the billions, need their own Robin Hood; a timeless, non-fictional figure they know was instrumental in protecting them from harm?s way in the centuries to come.

Unfortunately, Mr. Obama is not the man for this immense job.