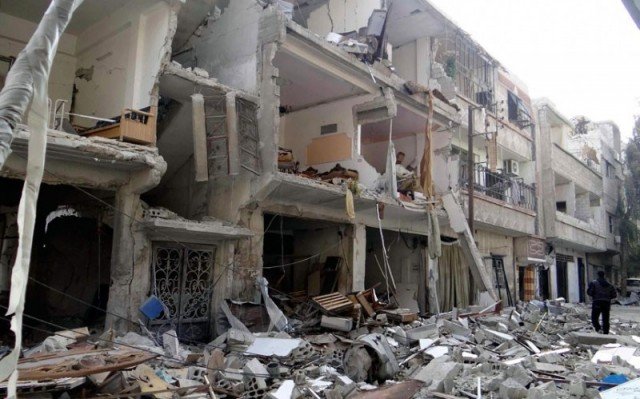 I would rather vote for a gorilla than for Assad

On June 3, Baschar al-Assad of Syria will force his terror on Syrians for a third term. With 14 years under his belt marred by tortures, deaths, and the use of chemicals against women and children, Syrians are not about to let the Assad family get off so easily.

Personally,?I would rather vote for a gorilla than for Assad.

Fear, Assad?s weapon of choice to rule the Syrian masses, has been mostly inconsequential. When Assad installs himself again next month as President of Syria, most Syrians would feel free from his grip.

Indicative of his win are signs we see before us in the flawed candidates his cabal selected to run against him. Syrians are so lucky this time around because instead of the ?Yes? or?”No? customary choices Syrians had to make under the watchful eye of the secret police (They call it democracy) with one Assad permanently affixed on any ballot since 1970, they will have three candidates to choose from. Yooopy yooooha. Free at last.

One is a terrorist, another is a?Christian hater, and a third is an?American citizen?with noticeable US credentials both terror camps, in firm control of Syria, be it the Assad camp or the extremist Islamist camp, would boycott. I guess Syrians will be forced, once again, to select a happy toss-that-VX-gas-canister candidate.

Amongst 23 million Syrians, Assad is forcing Syrians to select the worst of the litter to include him. This is how much this man loves Syria.

Honestly, if I, as an American-Syrian, had a choice between Assad and a gorilla, my vote would go for the gorilla. It is a safe vote since I know that gorillas have a hard time recognizing a gas that kills people from a gas that fires a turbine. Furthermore, jungle primates tend to be a bit more caring to their kind.

I decide to act by forcing a fourth candidate on the ballot.

To speed up the process, I called the Smithsonian National Zoo to seek a candidate. Of all the primates listed,?Mandara, a ?Supermom? gorilla caught my eye. I think Mandara would run Syria with a firm hand (She already mothered six tough gorillas) and more importantly, she would be jumping on tanks, not firing them. As for Assad?s favorite toy, the barrel bomb, I truly believe Mandara would toss them out in the sea, not on mothers and children. Imagine that, a gorilla is friendlier to humans than Assad could ever be.

The Smithsonian was not too happy about losing Mandara, but what the heck, the ageless fixture promoting arts and humanities never had a gorilla run for office before, and it intrigued the hell out of the Smithsonian leadership.

Funding for transporting Mandara was quickly raised and on a Russian ship, that initially was carrying weapons to Assad, I, with Ben Tugnutt working the night shift at the White House, set-up a luxury tent inside its hull to accommodate the next President of Syria. Our banana budget alone could have fed 100 entire Syrian families for 10 years. My next charitable dime is going to the Smithsonian.

The next step was to introduce Mandara to Syrians. Before we embarked on this gargantuan task, we had to create a story of some kind, a compelling argument of why Mandara the gorilla is better suited than Assad to lead Syria. It was not enough to say she is a tank jumper because Syrians, after three years of incessant Assad terror, have grown weary of promises made by anyone with WH credentials.

This is when the brilliant idea of juxtaposing Mandara?s picture with her bare feet next to Asma al-Assa wearing a $5,000 pair of shoes was conceived. If Mandara had to win this election, we needed to show her as bare as our people were.

Our campaign slogan began to take shape and our volunteer list swelled to unimaginable numbers. Assad, as usual, dispatched his own monkeys to monitor Mandara for fear the people may decide she is a better candidate for the banana republic Syria has become. The effort backfired because the monkeys Assad sent joined Mandara?s political campaign. This chick is magnetic.

The momentum of our political campaign had such energy and such enthusiasm from millions of Syrians that Mandara won the election and became the first gorilla president of Syria beating Assad with a resounding 20 to 1 margin (That?s 20 votes for each one Assad received). Who was responsible for the ballot count? None other than the Syrian Chamber of Commerce who, based on Kwame?s food budget, decided it needed the business.

I credit Ben Tugnutt for Mandara?s success. It was his idea to highlight Mandara?s bare feet to Asma?s.

So glad someone at the White House finally got something right on Syria.