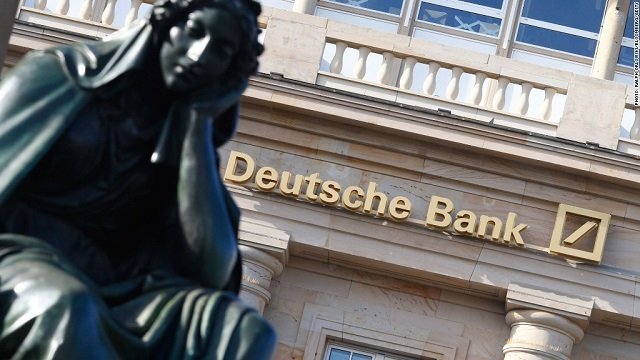 Deutsche Bank to Pay $258 Million and Fire 6 in Settlement

November 6, 2015 5:59 pm 0
What The Very Few Realize About Israel
Remove Assad From Power for Syrian Refugees to Return Home
Britain Reacts to the Petition to Air Drop Food for Madaya

Deutsche Bank agreed on Wednesday to pay $258 million and fire six employees to resolve investigations by state and federal banking regulators into its dealings with countries like Iran and Syria in violation of United States sanctions laws.

Deutsche Bank, a German banking giant that has a big presence on Wall Street, will pay $200 million to the New York State Department of Financial Services and another $58 million to the Federal Reserve, the regulators said. It has also agreed to appoint an independent monitor.

It is the latest in a string of settlements over sanctions violations as regulators take aim at banks for doing business with blacklisted countries. Still, criminal investigations by the Manhattan district attorney and the United States attorney’s office in Manhattan were continuing, people briefed on the matter said.

Regulators have scrutinized banks’ past dealings with countries on which sanctions have been imposed. Many of the banks under investigation are large European-based institutions that assisted clients in the United States through their New York operations.

Last month, Crédit Agricole of France agreed to pay $787 million to resolve criminal and regulatory investigations into its dealings with Iran and other countries. The biggest case was settled last year, when another French bank, BNP Paribas, pleaded guilty to criminal charges and paid a record $8.9 billion in penalties.

Investigations into Société Générale and UniCredit were continuing.

Anthony J. Albanese, the acting superintendent for the Department of Financial Services, said in a statement on Wednesday: “We are committed to investigating and pursuing sanctions violations and money laundering at financial institutions. We are pleased that Deutsche Bank worked with us to resolve this matter and take action against individual employees who engaged in misconduct.”

In a statement, Deutsche Bank said: “We are pleased to have reached a resolution with the New York Department of Financial Services and the Federal Reserve. The conduct ceased several years ago, and since then we have terminated all business with parties from the countries involved.”

The activity under investigation occurred from 1999 to 2006, according to regulators. Deutsche Bank handled 27,200 dollar-clearing transactions, valued at over $10.86 billion, for customers in Iran, Libya, Myanmar, Syria and Sudan. Regulators said bank employees had developed ways to hide the nature of the transactions from internal controls intended to flag problematic payments.

The regulators pointed to emails among various Deutsche Bank employees. One said, “Let’s keep this email strictly on a “need-know’ basis, no need to spread the news.”

Several of the employees involved in the conduct have already left Deutsche Bank, regulators said on Wednesday, but an additional six will be fired and three others will be banned from duties involving Deutsche Bank’s American operations.

Investigations and settlements of cases involving violations of United States sanctions are nearing their end just as Washington is easing its stance toward some foreign countries such as Iran and Cuba.

Deutsche Bank to Pay $258 Million and Fire 6 in Settlement