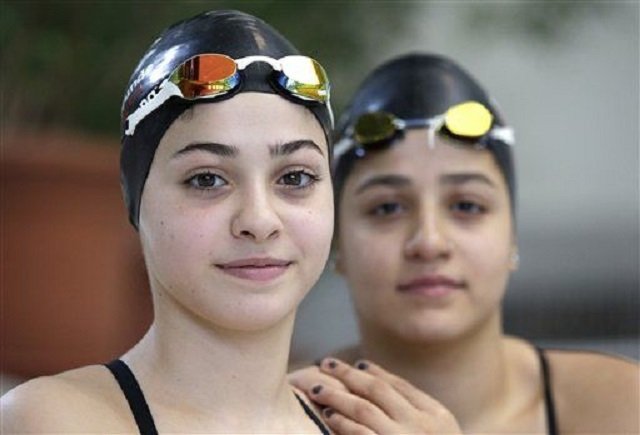 How Syrian Refugees Are Contributing in Europe

For those who have mocked Europe for welcoming Syrian refugees, eat your hearts out. This is how Syrian refugees are contributing in Europe the same way Steve Jobs contributed his genius to American technology.

Sarah and Ysra Mardini pull bathing caps over their long, black hair and slide into the water, disappearing among the throng of swimmers with powerful, practiced strokes.

Two months ago the sisters were swimming for their lives, after jumping off an inflatable boat that began taking on water carrying refugees to Greece. Now they are ploughing down the length of a pool built for the 1936 Olympics in Berlin that has become a home away from home for two young women, who were once among Syria’s brightest swimming stars.

“Everything was good,” said 20-year-old Sarah. “That was before the war.”

After the conflict began, the Mardini family moved around to avoid the fighting and tried to ensure their daughters could keep on swimming. Ysra, now 17, even represented Syria at the short-course world championships in Turkey in 2012. But as the war intensified fellow swimmers drifted away.

“We were 40 or 50 swimmers, and now we are maybe 10 or 7 swimmers in Syria,” said Sarah. “We want to have a future. I want to be in college, I want to be an international swimmer and my sister too. But if we stay there we will not reach that because the situation is not OK in Syria.”

The Mardini sisters eventually left Damascus in early August, joining a fresh wave of Syrians who had given up hope of seeing the conflict end soon. The sisters traveled to Lebanon, then Turkey, where they paid smugglers to take them to Greece.

Turkish coastguards drove their boat back on the first attempt. The second time they boarded a small inflatable dinghy at dusk. Within a half hour it was taking on water, hopelessly overloaded with people, most of whom couldn’t swim.

As evening winds churned up the Aegean Sea, all bags were thrown overboard to give the small boat a chance to stay afloat. When that wasn’t enough, Ysra, Sarah and three others who were also strong swimmers jumped into the water in order to give the boat more buoyancy.

“I was not afraid of dying, because if anything happened I could swim to arrive at the island. But the problem was that I had 20 persons with me,” said Sarah. “In Syria I worked in a swimming pool to watch people not drowning, so if I let anyone drown or die I would not forgive myself.”

Bravo Mardini sisters. Syrians are extremely proud of you.

How Syrian Refugees Are Contributing in Europe