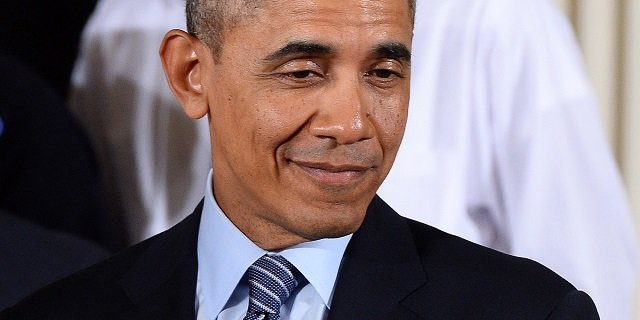 October 7, 2015 10:41 am 0
Syrian Israeli Strike Kills Jihad Moughniyah
Where is Goldstone When it Comes to Crimes Against Humanity by Assad?
What Has Obama Done to Stop the Boycott Movement Against Israel?

Barack Obama keeps a special big smile for times when the people he hates most really get screwed. He smiled that great big smile again recently when he said how much he loves the Jews – right after selling Israel out to its most dangerous enemy in history.

Human monsters with nuclear weapons are a completely new factor in the world.  We’ve seen plenty of monsters before, but not equipped with Armageddon weapons.  That’s what Obama has achieved in his historic presidency.

Don’t doubt that he has done so purposefully, starting before he took office, when he sent Ambassador William G. Miller to Tehran to tell the mullahs not to make any agreement with George W. Bush, because they’d get a much better deal from Obama.

None of this is coincidence.  It was planned with malice aforethought.  Obama’s delighted “screw you” smile is truly demonic.  It seems to show that he is not just a narcissist, but a malignant narcissist who enjoys inflicting catastrophes on others.  Bill Clinton is also a supreme narcissist, but I don’t remember him actually laughing at times like these.

Prime Minister Netanyahu, who is a morally serious man, started his Churchillian speech to the General Assembly – the biggest collection of tyrants, thugs, and sleazocrats in the world – with almost a minute of silence.  Bibi’s silence made the audience uncomfortable, we are told.  He stared at the Star Wars bar scene with undisguised contempt.

In case you forgot, the General Assembly has elected the Sudan, Iran, and Saudi Arabia to its “human rights commission.”  A more perverse crowd there hasn’t been seen since Hitler’s Nuremberg rallies.

What’s worse, the Americans fit right in.  This was a scene right out of Tolkien’s Land of Mordor, with the United States taking the side of Sauron.

For 45 seconds, Netanyahu waited for the voice of conscience to speak, if any U.N. members still have one.  But there is no limit to their cynicism and malignancy.  They sat their with blank faces.  In time, when history has the last word, they may come to curse their cowardice and opportunism, the way Hitler’s appeasers did.  But then, Chamberlain was an honorable man who came to recognize his mistake.

In the meantime, as Netanyahu said, this is a time not for rhetoric, but for readiness.

Sane nations use nuclear weapons only as a last resort.  Since Israel is facing a martyrdom regime with mass-killing weapons, and the West has bowed down to the mullahs out of bottomless greed and cowardice, Israel is preparing.

Decent people can see this moral atrocity only with a sense of helplessness and despair.  But mark it in your memory.  Never forget.  The international left and Muslim throwback regimes have planned this moment for decades.  They are far from innocent.

Among their enablers are two American presidents: Jimmy Carter, who knowingly allowed a mass-murdering priesthood to take power in Iran, and Obama, who surrendered six decades of U.S. anti-proliferation efforts to the thugs.

There will be consequences.

Russia and China immediately moved strategic forces to Syria.  That’s one instant result of this administration’s delusional cowardice.  Nobody can predict where the Russo-Chinese strategy will go, but it’s obviously been planned for months.  Russian marines immediately went into action in support of Syria’s President Assad, assisting Hezb’allah.  You don’t move thousands of soldiers into battle without extensive planning.

Putin has recently received visitors in Moscow: the Israelis, the Saudis, and the head of Iran’s Quds force.  Putin’s move was coordinated with China as well, and now we see Iraq joining the party.

Our abandoned allies are turning to the only alternative they have.  You can’t blame them for wanting to survive the chaos this administration has wrought.

Putin is beating Obama hollow, as you could see by their faces at the U.N.

Here are just a few strategic benefits Russia and China expect to gain.

1. Russia and China are both in economic trouble.  But now Putin has the clout to get the whole Middle East on his side – literally every Arab regime plus Iran and Israel.  The Eastern Mediterranean and the Gulf are up for grabs.  Putin could organize another OPEC cartel with himself at the top.

The lightning move by Russian and Chinese naval task forces is being followed in Asia as well, where Japan is re-arming for the first time since World War II.  China and North Korea still harbor dreams of revenge against Japan.  The American cop has left the beat.

2. Russia and China are serious powers.  So is resurgent Islam.  Europe and the U.S. are not serious anymore – certainly not as long as this administration lasts.  Europe can defend itself against Muslim mass infiltration only by appealing to Russia, with its centuries of fighting jihad.  But Putin will take his pound of flesh.  The Germans are already paying premium prices for Russia’s natural gas.  This is just the beginning of Pax Muscoviae.

3. ISIS now has thousands of fighters from Russia (Chechens) and China (Uighurs).  They are being combat-trained and indoctrinated in the worst kind of jihad, and they pose a direct threat to Russia and China when they go back.  Putin came to power by defeating Chechen terrorism in Russia.  So far, Putin’s forces have attacked the anti-Assad rebels, but also some ISIS bases.

Russia and China are not going to leave until they’ve taken care of their own strategic threats.  Or they may simply stay as the new arbiters of the Middle East.

4. Iran can now claim to have America and Europe in its pocket, as well as Russia and China. That could be extremely dangerous.

Iran is getting ICBMs and strategic weapons, as well as modern anti-missile defenses, plus air and naval power for long-distance force projection.  The Axis of Evil is now a nest of tarantulas.

It makes no sense for Russia and China to tolerate a nuclear Armageddon regime less than an hour away as the missile flies.  Russia and China have fought jihad invasions for hundreds of years, and they do not forget.  The Iranians have constantly played Russia against China.  But now Putin has drawn China into his orbit.

One likely goal is to keep the mullahs in their cage. Big powers always try to limit potential enemies.  None of these nations is friends with any other.  They have no shared culture.  They only make alliances of convenience.

For Americans who care about national security, it’s crucial to remember that none of this is a coincidence.  Obama and the left have long wanted America to retreat from the world.  That is bottomless idiocy, of course, in a world governed by the most destructive strategic weapons in history.  But this is what the New York Times has wanted since Jimmy Carter’s fatuous presidency.

We are being sabotaged from within, and our strategic enemies understand that very well.

Bottom line – Obama has sucked all the air out of the strategic balloon in the Middle East, which simply collapsed.

McCain to Obama: ‘Get over your temper tantrum, Mr. President’
Kerry’s ignorance is simply astounding
Why Assad Should Ask for STL Indictments
Support U.S. Allies 152