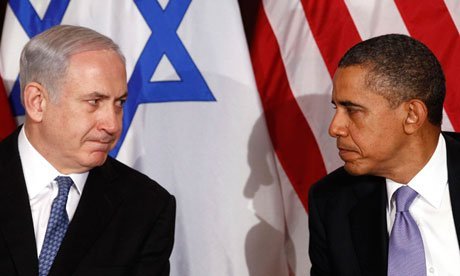 May 3, 2015 6:42 am 0
Next is the psychological war
The Cash Register of Terror
The Assad Ferris Wheel Ride

It seems that Obama’s Netanyahu treatment awaits Arab leaders too.

The patterns the world witnessed with how Obama stabbed Israel in the back and defamed her leader Benjamin Netanyahu may be what Obama has in mind for the Arab leaders as well. All in the name of safeguarding his single obsession for a bad U.S. Iran deal.

In return for their support of Obama’s Iran deal, Arab leaders are demanding preferential treatment in the form of a security pact. This could possibly translate into US boots on the ground given that the Obama Administration has been unable to curb Iran’s terror behavior in the region.

Obama will not offer such a pact. What he will offer instead are private promises and personal guarantees. Who in their own minds would take Obama’s words seriously? To protect his Iran deal from Israeli attacks on Iranian nuclear installations,  Omri Ceren from The Israel Project said Obama’s Netanyahu treatment may cause problems:

” … White House officials somewhat notoriously promised the Israelis they would deliver a good nuclear Iran deal if only the Israelis held off on attacking Iranian nuclear infrastructure – and then turned around and publicly boasted about having sandbagged Netanyahu, who they labeled a chickenshit coward for believing them.”

To prevent the Arab countries from defending themselves from a nuclear Iran, Obama would embark on the same tactic. The problem is that Obama’s foreign policy geniuses cannot possibly see the difference between Israel and Saudi Arabia.

Israel is a vibrant democracy. Its political leaders are accustomed to boxing jabs and dancing around their political opponents to get the upper hand. In Saudi Arabia, though, the King rules absolutely. He does not jab or dance around anyone. He simply knocks you out cold. In other words, if Obama dispenses the Netanyahu treatment upon King Salman, the King will have no patience for his petulance or the training for a ‘give and take’ that Netanyahu is naturally acclimated for. King Salman will simply bolt and with him take a nation into the nuclear world.

I dare anyone in the Obama Administration to convey the Netanyahu treatment upon King Salman by calling him chickenshit if he refuses to accept Obama’s promises or his lust for the US-Iran deal, as Ceren so eloquently referred to it on The Israeli Project website. That Obama official will be hearing the big boom of a nuclear device testing in Rub al-Khali all the way to Washington.

Obama has no clue how much he will miss Benjamin Netanyahu now that he will have to deal with Kings and Emirs, all of whom as impatient with Obama as a spider is to a fly.

Yet, Obama may be preparing to deceive Saudi Arabia and the GCC countries the same way he deceived Israel. By making promises he does intend to keep and by using contempt, arrogance, and crassness unworthy of his stature if the Saudis do not take him to task.

Arab leaders have no patience for the Obama Netanyahu treatment, nor will they believe him after his lies to Benjamin Netanyahu.

Obama is stuck with a bad US-Iran deal and possibly runaway countries testing and building nuclear bombs in a volatile region.

Oh, the genius of Jarrett, Rice, McDonough, and Rhodes.