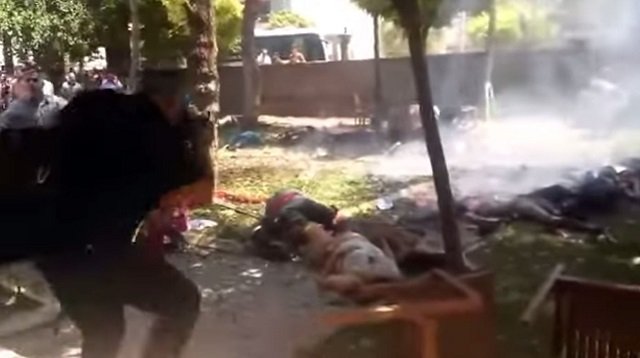 Tens of volunteers planning to visit Kobani to help the residents reconstruct the city were targeted in a suicide attack ISIS is suspected to be behind. The blast happened on Turkey’s border town with Syria on Monday (See blast video below).

The interior ministry in Turkey described the blast as a “terrorist attack” and vowed to find the perpetrators as soon as possible and bring them to justice.

“The Turkish authorities have strong reason to believe that the terrorist attack was perpetrated by ISIS,” a government official told AFP, using another name for IS.

The official, speaking on condition of anonymity, said the deadly attack in Kobane “strengthens our suspicions”.

An official in the prime minister’s office said 28 people were killed and nearly 100 injured in Suruc.

The savagery of ISIS knows no bound. Killing en masse innocent women and children is a crime against humanity.

Hurriyet Daily News reported that it is suspected that it was an attack carried out by an ISIS suicide bomber. The Kurds and ISIS have foyght against each other in Kobane, Syria.

There were reportedly 300 people mainly youngsters, all members of the Federation of Socialist Youth Associations (SGDF). Almost half were either killed or injured.

Our condolences to the families of those who perished at the hands of the barbarism of ISIS.

Striking Sunni terror but not Shia terror in Syria
McCain to Obama: ‘Get over your temper tantrum, Mr. President’
Putin Is Instigating ISIS to Battle The Moderates
Radicalism 567