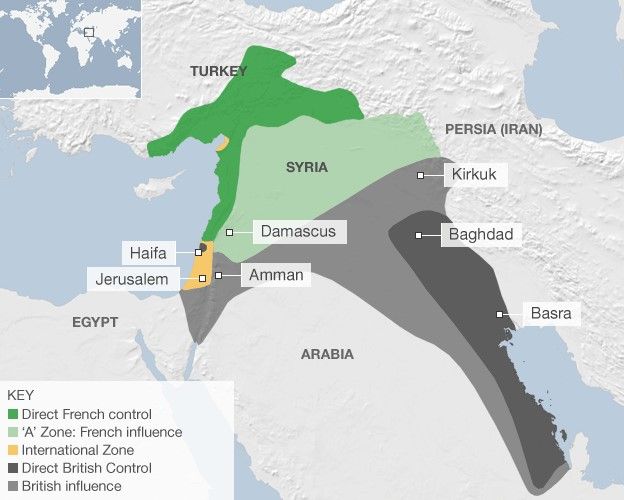 Charles Krauthammer writes in the Washington Post it is time to rethink Iraq and Syria. He posits:

“It begins by admitting that the old borders are gone, that a unified Syria or Iraq will never be reconstituted, that the Sykes-Picot map is defunct.”

Both countries are in disarray and the Sykes-Picot lines are defunct. We agree with this snapshot.

However, the solution Krauthammer seems to suggest goes along re-constituting the Sykes-Picot along ethnic lines that we believe will premeditate more violence and more wars in the future.

If we want to see the Middle East burn, then let us separate every ethnic group and give them a country.

Especially when we take oil-rich lands from the more aggressive majority in the region.

Kurds are not Arabs, which suggest a country with boundaries. Fair enough. Between Iraq and Syria, the Kurds can build a self-sustaining nation.

The problem with this idea is that the Kurds would walk away with almost all the oil resources of Syria and a big portion of Iraqi oil.

Build a new nation from two smaller pieces of two larger nations while starving them of their precious oil is a formula for disaster.

This is re-engineering a new Sykes-Picot to perpetuate wars in the Mesopotamian region. If America’s aim is to fix Sykes-Picot by making it worse, we should stay home and shut it.

The Druze are a friendly and peaceful minority whose people live between Syria, Lebanon, and Israel (Majority live in the Golan Heights). In Syria, the Druze mostly live in the Sweida Province, which straddles Jordan.

If connected contiguously to the Dara’a Province to Sweida’s west where the moderate Free Syrian Army is operating, it could create a buffer zone between the Assad regime, or its remnants, the extremists to the north, and Israel.

Krauthammer did not call for that buffer, but the insinuation could not be missed.

The region is rich farmlands and could survive independent of a central Syrian government as a smaller Canton. If formed, it could become one of the most peaceful Arab regions backed by friendly relations with both Jordan and Israel.

There is only an upside to Krauthammer’s insinuation if the region remains Syrian.

Third, the Alawites and the Christians

Many in the media have been implying that for the Alawites and the Christians of Syria to survive, they must form their own mini Alawistan nation on the Mediterranean coastal region.

Such ideas are nuts because they speak to the extremists who prefer to corner the minorities for easier accessibility. With so much blood on the hands of the Alawites, we would be sentencing them all to death.

If the U.S. finds it hard to defeat al-Qaeda, how harder would it be for the Alawites to defend themselves from the terror group?

If the Syrian war lasts 10 years, you need to multiply it by a factor of three to assess how long the Sunni revenge campaign will last. Mark our words.

Fourth, the Shia of Iraq

Accept Iranian influence over the central government of Baghdad and abandon it to Shia Iran Krauthammer writes:

“In Iraq, for example, we are reaping one disaster after another by pretending that the Baghdad government — deeply sectarian, divisive and beholden to Iran — should be the center of our policy and the conduit for all military aid.”

Arab Shia and Iranian Shia are like oil and water. Iranian projection of power in Iraq makes us miss this fact.

If we redraw Iraq on that basis, it means Iraq is now split into three regions. Each ethnically cleansed.

Fifth, an arid Desert for the Sunnis

Now imagine what would be left for approximately 20-22 million Syrian and Iraqi Sunnis if both countries are split along those wishful thinking ethnic lines. An arid desert with no resources and very little fertile lands to cultivate.

Does anyone think the aggressive Sunnis now fighting in both Syria and Iraq would simply roll in cactus to accommodate the new Sykes-Picot? Landlocked, land-dry, and losing all oil resources. Pipe dream if there was any.

Be careful how to redraw the Sykes-Picot lines unless perpetual wars, terror, and mayhem is the ultimate goal.

If the aim is to separate the good guys from the bad guys, then it needs to be constructed intelligently on more equitable basis, resources-wise.