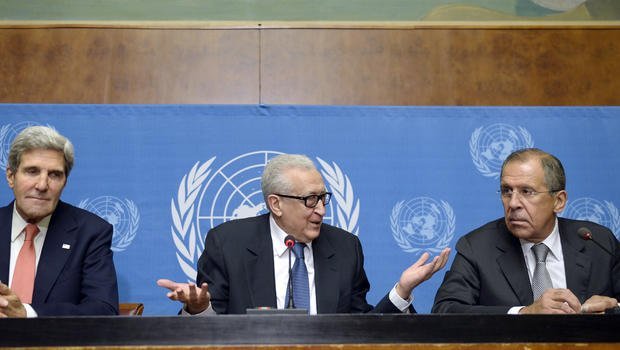 Geneva II Only If

October 22, 2013 10:45 am 0
Not the Uterus of Queen Jarrett
Assad starving Ghouta, after gassing it in 2013
Assad Barrel Bombs are Spark Plugs to ISIS Engine of Terror

The pressure by Secretary Kerry against the Syrian opposition to attend Geneva II is mounting. The strange thing is that the Assad regime is pursuing it as fervently, which leads us to believe that a secret deal has been struck between the US and Russia to minimize the opposition’s capabilities.

With such divergent opposition with backgrounds and outlooks representative of many religious sects, political ideologies, and societal orders, it is not hard to divide and conquer the pieces. In fact, this has always been the number one ammunition the Assad regime uses to weaken his alternative (First-hand experience in this field). Once within his grasp (Geneva II), he will finish the Syrian opposition altogether.

Meanwhile, the opposition itself is changing by the hour and the danger the Islamists pose to the region is on the rise as I have predicted in the past. Today, the foreign Jihadists entering Syria come from 60 different countries (That is 30% of the world) and they are storming in record numbers surpassing the Afghan-Soviet war.

“More and more opposition groups are peeling away from the Western-backed moderate Syrian National Coalition and its Free Syrian Army military umbrella, and joining with al Qaeda-linked Islamic State of Iraq and Syria and Jabhat al-Nusra, which are better funded, equipped and organized.”

This is the result of the Obama Administration not fully supporting the opposition with weapons.

Further, what is the Obama Administration doing about the Islamization of Syria? Protecting the source of that Islamization by believing that a political settlement will repatriate the Jihadists.

The name attributed to AQ now is Dawlat al-Islamiyya fi al-‘Iraq wa-l-Sham. Translation? The first Islamic attempt in modern history to merge Iraq and Syria, two independent nations, together. Mr. Obama’s neglect to bring Assad down gave birth to an Islamist State fusing two countries. If you do not think this is dangerous, read your history.

Just imagine if AQ in Yemen joins what will happen next.

While Mr. Kerry is building momentum for Geneva II, Syrian children and women are starving because of a siege laid down by the Assad forces. The US State Department acknowledged them with one full sentence delivered by Ms. Jen Psaki, spokesperson of the US Department of State in which she held the Assad regime accountable for his actions, followed today by a statement. It must have scared Assad to death.

The Syrian opposition should not consider meeting in Geneva II unless the following conditions are met first.

The Syrian opposition should play the Jihadist card to their advantage. Either the alarm bells would sound eventually for Washington to come around and seek all the help it needs to stop the festering in the Levant it now believes will go away on its own, or it is asking Iran to make it disappear by lifting the sanctions. Either way, the Jihadist card will uncover the motives behind this administration.

While Mr. Kerry concentrates on Geneva II, Washington is ignoring the biggest danger the US and the region may yet face.

Geneva II Only If