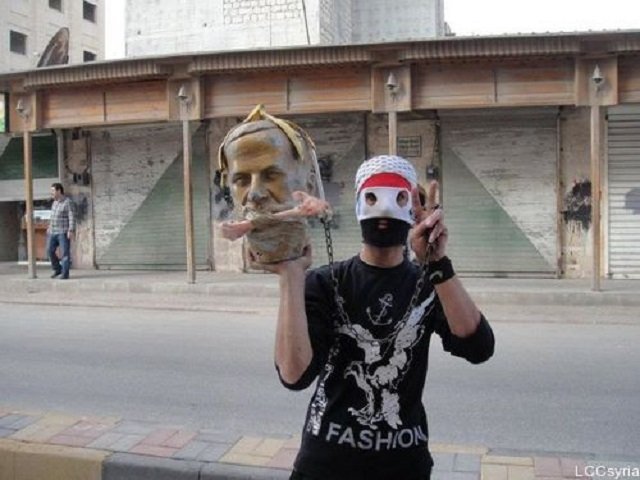 Bashar al-Assad is Syria’s problem, not its solution

Source: CNN – by Nawaf Obeid (Bashar al-Assad is Syria’s problem, not its solution)

Arab states, led by Saudi Arabia, made clear during the U.N. General Assembly meeting this week that they will not cooperate with an emerging Russian military alliance geared toward defeating ISIS (which calls itself the Islamic State) and bolstering the Assad regime in Syria.

The recent Russian military moves — far from leading to the defeat of the militant group — have increased the risk that the Syrian conflict and the fight against ISIS will escalate into a full-blown proxy war.

However, while the Saudis and their allies support the defeat of ISIS and are actively involved with the U.S. and other nations in a battle against it, Saudi Foreign Minister Adel Al Jubeir has openly declared that President Bashar al-Assad must go: “There are two options for a settlement in Syria. One option is a political process where there would be a transitional council. The other option is a military option, which also would end with the removal of Bashar Al-Assad from power.”

As U.S. and Arab officials have made public, the Iranians have been meeting with the Russians in the past few months to plead for their military support to preserve the brutal Assad regime in Syria.

High-level meetings having taken place in Moscow between senior Russian and Iranian diplomats and generals; Russia’s most advanced SU-34 fighter jets and attack helicopters have been sent to help shore up defenses in Latakia, the coastal region that is the stronghold of Assad’s family and his Alawite sect; and Russian surveillance drones, along with Iran’s Islamic Revolutionary Guard Corps (IRGC), are now deployed in Syria.

With this recent development, it is becoming increasingly clear that the Saudis are going to be forced to lead a coalition of nations in an air campaign against the remnants of Syrian forces, Hezbollah and Iranian fighters to facilitate the collapse of the Assad regime and assist the entry of rebel forces into Damascus.

Since the beginning of the conflict, the Kingdom has been pressing the international community to act, but to no avail. Now, following a successful Saudi-led campaign to wrest Aden and the rest of south Yemen from Houthi, Saleh and Hezbollah fighters, Saudi Arabia realizes that it can and must take matters into its own hands. While Russia supports the current Syrian government because it fears a takeover by radical Islamists and it represents a vital strategic foothold in the region, the Saudis view its demise as a necessary starting point to restoring peace and stability to the Middle East and wider Arab world.

The situation on the ground in Syria is ripe for a concerted air campaign that can assist the two major rebel coalitions ready to take Damascus and turn the course of the war. These two forces — “Army of Conquest” in the north and “Southern Front” in the south — are strategically positioned, battle hardened, and more than equipped to carry out what will be required by land. All they require is sustained air support that can neutralize the remnants of Assad’s army brigades, national defense forces, and Hezbollah/Iranian battalions, as well as prevent Syrian planes (and now maybe Russian ones as well) from dispatching their dreaded and devastating barrel bombs. With such assistance these coalitions will be able to move into Damascus and take the capital city on their own.

A large coalition of Arab and non-Arab nations are ready to follow the lead of the Saudis, including Turkey, UAE, Qatar, Bahrain, Sudan, Morocco, and Kuwait. Pakistan and Malaysia are also seriously considering this option. These Arab countries (and Pakistan) already have extensive experience coordinating their air forces after joining the Saudi-led coalition in the successful liberation of South Yemen. In fact, they continue to work together as they begin the land battle to wrest the remaining Houthi and Saleh rebels from their last holdouts in Yemen. Therefore, working together on Syria would be an expansion of an already well established command and control system. Egypt and Jordan, missing from the original list, would have to make clear their positions as their role in Syria continues to be ambiguous.

The Royal Saudi Air Force (RSAF) would be the tactical leader and provide the most planes and resources. For the Yemen campaign, RSAF contributed 100 fighter planes and has flown so far about 90% of all coalition sorties. For the Syria campaign, the Kingdom, which possesses the Gulf’s (and Arab) best-equipped military, would be expected to contribute about another 100 aircrafts from its massive inventory of advanced fighter jets, including 152 F15SAs (Boeing’s newest and most advanced variant), 78 F15C/Ds, 80 Panavia Tornados (upgraded to BAEs most advanced variant), and 72 Eurofighter Typhoons. In addition, the coalition forces would provide another 100 planes, including F16s from Turkey, UAE, Bahrain, Morocco (and perhaps Malaysia, and Pakistan), F18s from Kuwait and Mirage fighter jets from UAE and Qatar. A limited drone force would also probably be deployed over Syria.

Moving into Syria to assist the anti-Assad coalition forces by air would be a manifestation of the emerging Saudi defense doctrine. This doctrine has been developing over recent years, but has been forced into high gear by the regional turmoil brought about by the Arab Spring and the recent unwillingness of the U.S. and major European powers to intervene decisively in Yemen, Syria and Iraq. One of the pillars of this doctrine is power projection, which is based on three strategies.

First, the Saudis are continuing the expansion of their military with an emphasis on modernization, organizational reform, weapons and technology acquisitions, and an increase in training programs and qualified recruits. Second, while the Saudis intend to remain strategically linked to the U.S. and Europe, they will be distancing themselves from the passiveness of their international partners and emphasizing swift intervention in unstable countries to deter hostile actions, while also increasing economic and martial aid. Finally, as the cradle of the Muslim faith and the leader of the Arab world, the Saudis see it as their legitimate role to take the lead and guide their allies into battle when circumstances warrant.

The Saudis know, however, that building a coalition is the key to their success in facing the many conflicts engulfing their region. This is why they are pushing forward on aGulf Unified Military Command that will help sustain a new Arab security architecture. The nations listed above are the core Saudi allies in such a command, and their joining together is seen as the best way to counter an increasingly aggressive Iran. And now with the Iranian nuclear deal and more and more evidence for Iranian meddling in most of the region’s hot spots, the time has never been more urgent for a united Saudi-led Arab front.

Russia’s growing military alliance with Iran and al-Assad in the name of defeating ISIS is a disconcerting development that complicates the situation in the Middle East. However, it is clear that the major Arab powers in the region, led by Saudi Arabia, cannot sit back and let the Russians and their proxies dictate the course of events. Over 300,000 Syrians have died and 4 million are now refugees. ISIS must be destroyed, but that can only occur once al-Assad is removed from power. Thus, we are likely to see in the near future a concerted Saudi coalition moving into Syria by air and providing the anti-Assad coalition forces the cover they need to break the stalemate of this war and, hopefully, bring it to an end.

Bashar al-Assad is Syria’s problem, not its solution