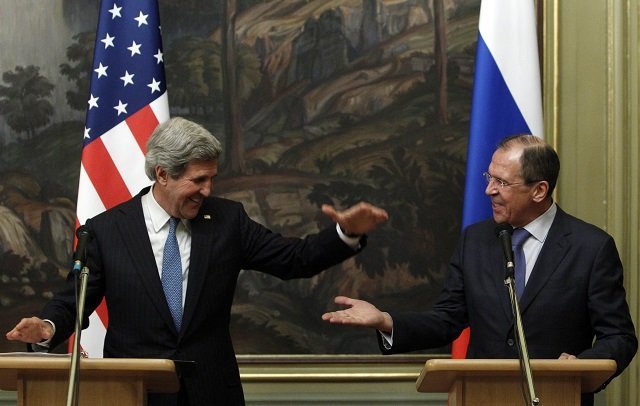 September 28, 2013 11:46 am 0
Minibus blast kills 21 in southern Syria
Parking our fight with Assad
Bashar al-Assad is Syria’s problem, not its solution

After over two years of doing nothing to stop Syria’s civil war, the U.N. Security Council has finally agreed on a plan for Baschar Assad to surrender his chemical weapons. The U.S. and its allies as well as Assad’s patrons in Russia hailed a diplomatic breakthrough at Turtle Bay, but this resolution still does nothing to hasten the conflict’s end.

Russia and the U.S. under Barack Obama have become Assad’s U.N. partners.

The resolution adopted on Friday evening obliges the regime in Damascus to fully declare its arsenal of chemical weapons and to dismantle them by the middle of next year. It commits Syria not to share its mustard and sarin gas stocks and other munitions with friends at Hezbollah and elsewhere.

If you choose to believe in the power of arms control over rogue actors, this is progress. But for realists the early signs aren’t good.

Last weekend Syria submitted its declaration of its chemical weapons and delivery systems. The declaration hasn’t been made public but our sources say it isn’t complete. The Syrians disclosed 32 sites, while U.S. intelligence believes there are about 50.

Some of the munitions are mobile, and while the Syrians did admit to eight such mobile sites, the Syrians hid them when President Obama threatened to bomb in response to the August 21 sarin gas attack outside Damascus. The U.S. and Israel have a good idea of what the Syrians have and may still be hiding. The trick will be to compel Assad’s cooperation.

The resolution’s most notable weakness is its lack of teeth. There’s not a word about holding anyone in Syria accountable for last month’s or the 13 or so other chemical attacks. As for compliance with the disarmament clauses, Assad can breathe easy.

Under Chapter 7 of the U.N. Charter, the Security Council can approve punitive measures such as sanctions or air strikes if Syria doesn’t comply. Except that’s not in this resolution. The British ambassador at Turtle Bay called it “binding and enforceable,” and America’s ambassador to the U.N. Samantha Power warned of “consequences for non-compliance.”

But read the fine print. Assad can play cat and mouse with inspectors or even launch another chemical attack. The only U.N. recourse is to call another Security Council meeting. Then we’re back where we started.

Russia has vetoed three resolutions intended to sanction Assad since 2011, and the Obama Administration was reluctant to act without U.N. approval even before this agreement. Assad knows the threshold for American intervention is even higher after President Obama asked Congress for permission to strike Syria but then grabbed Russia’s diplomatic lifeline rather than act on his own.

The U.N. deal caps a successful few weeks for the Syrian dictator. He faced down the world’s last superpower. His regime may or may not have to give up its chemical weapons, but he’s bought himself time to continue to use Iranian arms and Hezbollah fighters to defeat the opposition. With U.S. Tomahawks taken off standby, Syria’s fighter jets and helicopters have been redeployed against the rebels. Conventional weapons have killed the vast majority of the more than 100,000 dead in Syria.

Administration defenders say this chemical deal may be a diplomatic bridge to a larger Syrian peace. A negotiated peace is desirable, but it’s hard to see how sparing Assad from the fear of a Western attack will make him any more likely to negotiate. He and his Iranian patrons think they can win.

As for the Syrian opposition, they see all of this as an Assad victory and a Western betrayal. Earlier this week, 13 rebel groups broke with the Turkish-based, moderate Syrian Supreme Military Council and are expected to align with the Islamist fighters affiliated with al Qaeda.

Far from leading to a larger peace, the chemical weapons diplomacy seems to have radicalized both sides.