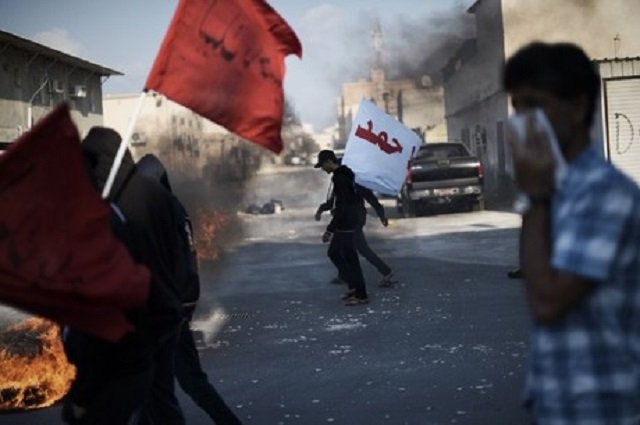 Bahraini authorities have arrested four Americans, including journalists, during protests marking the fifth anniversary of a Shiite-led uprising in the kingdom, police said on Monday. Are Americans behind destabilizing Bahrain?

“We are aware of reports that U.S. citizens have been arrested (in Bahrain). We have no comment due to privacy considerations,”

A police statement published by the official Bahrain News Agency did not specify the identities or nationalities of those arrested, or who they work for.

They were arrested in the Shiite town of Sitra on Sunday during clashes between security forces and protesters, the statement said.

“One of them was masked and taking part with a group of saboteurs in Sitra in acts of rioting and sabotage and attacks on security officials.

“The other three were arrested at a security checkpoint in the same area.”

The four entered Bahrain between February 11 and 12 and “provided false information to concerned authorities,” claiming to be tourists, police said.

However, “some of those arrested had carried out journalistic activities without permission from concerned authorities, in addition to carrying out illegal acts.”

Their case has been referred to the public prosecution.

Home to the U.S. Fifth Fleet, Bahrain was rocked by an Arab Spring-inspired uprising demanding reforms and a constitutional monarchy on February 14, 2011.

Authorities crushed the protest movement one month later. But demonstrators still take to streets and clash with police in Shiite towns surrounding Manama.